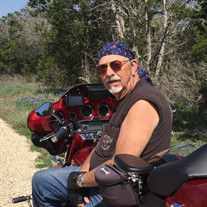 William Edward Sisk Jr. age 71 of Kingfisher, Ok passed away in the comfort of his own home surrounded by his family on June 25, 2019. A celebration of life service will be held at First Baptist Church of Kingfisher Monday July 1st, 2019 at 2:00pm Eddy was born March 7, 1948 in Seminole, Oklahoma to Bill and Marie Sisk. He graduated from Lindsay High School in 1966. On August 26, 1967 he married the love of his life Jowanna Franklin. Soon after he joined the Navy. As a Navy diver, he qualified in underwater diving and salvage. Some of his missions included marine salvage, harbor clearance, underwater ship husbandry and repair, saturation diving, experimental diving, underwater construction, and welding. He had a love for the water and made sure his children did as well. While living in Norfolk, Virginia he became a father. Soon after he had two children whom he loved dearly. He began his lifetime career in the oilfield industry in 1972. In 1984 Sisk Construction Company was born and he was able to work side by side with his father. Eddy was also able to teach his son, Trent the business and worked with him until his death. Eddy loved to cook, entertain, attend auctions, ride Harleys, and travel. He and his wife traveled often with their beloved friends. The last years of his life were spent on the open road with his wife by his side. Some will walk through the pearly gates and some will ride, Eddy is now in heaven: Free Road, Full Tank and Full Throttle. Eddy is survived by his wife, Jowanna; daughter, Tracy Baustert and husband James; son Trent Sisk and wife Marie; grandchildren, Ethan Moeller, Cody Baustert, Ryan Sisk and Jake Sisk; Great Granddaughter, Kinslee Moeller, sister Debbie Payne and husband Mark; sister-in-law Wanda Cornforth and husband Jerry; brother-in-law Tim Franklin and wife Vickie; mother-in-law Pearl Franklin; numerous nieces and nephews and wonderful friends. He was preceded in death by his mother, Eula Marie (Brewer) Sisk; father, William Edward Sisk Sr. (Bill), and father-in-law, Marlin Franklin In Lieu of flowers donations can be made to The First Baptist Church of Kingfisher or Oklahoma Heart Hospital Research Foundation.

William Edward Sisk Jr. age 71 of Kingfisher, Ok passed away in the comfort of his own home surrounded by his family on June 25, 2019. A celebration of life service will be held at First Baptist Church of Kingfisher Monday July 1st, 2019 at... View Obituary & Service Information

The family of William Edward Sisk Jr. created this Life Tributes page to make it easy to share your memories.

Send flowers to the Sisk family.