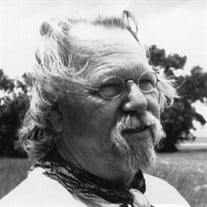 Walter Barrett passed away June 6 at Mercy El Reno. He was born Nov 6, 1931 to Fred and Verna Barrett in Cherryvale, Kansas. At an early age, his family moved to El Reno. Walter graduated from EHS in 1950. After graduation, he joined the National Guard and served in Korea. He was honorably discharged from the Army in 1952. He went on to attend El Reno Junior College earning his Associates Degree. In 1955, he began working at the El Reno Reformatory. During a trip to Dallas with a friend, he met Betty Ann Sirbaugh. They married in 1958. To this union two sons were born, Bret and Blair. Walter retired from the FCI in 1983. Later he worked at the junior college as a security guard. He spent his retirement volunteering for the El Reno chapter of the American Red Cross, meeting friends and fellow veterans at the American Legion, going to garage sales & auctions, happily participating in reenactments with the Ben Clark Rifle Club, and spending time with family. When he could not safely care for himself, he moved to the St. Katharine Retirement Center in 2009. He considered it "home" due to the wonderful care he received from the staff and the many residents he befriended. He was preceded in death by his parents, his wife, brother "Chub," sister-in-law Betty and son, Blair. Walter is survived by his son, Bret, daughter-in-law, Karen, and his grandaughter, Mary, of Yukon, his niece. Jana Branch with her husband Tom, of Lewisville, Tx, his nephew Monte Barrett and his wife Terry, of Woodland Park, Colo., grand-nephew Jeff Branch and his wife Melodie along with their sons, Walter's great grand-nephews, Beau and Cal, also from Lewisville, Tx. Per his wishes no services will be held. Cremation will be arranged by Wilson Funeral Home.

Walter Barrett passed away June 6 at Mercy El Reno. He was born Nov 6, 1931 to Fred and Verna Barrett in Cherryvale, Kansas. At an early age, his family moved to El Reno. Walter graduated from EHS in 1950. After graduation, he joined the... View Obituary & Service Information

The family of Walter Linn Barrett created this Life Tributes page to make it easy to share your memories.

Send flowers to the Barrett family.