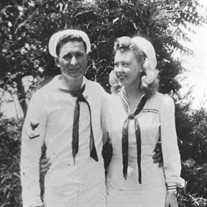 VIRGINIA RUTH VON TUNGLEN HURST Virginia Ruth Von Tungeln Hurst was called into Heaven on July5th, 2019. She will reunite with her family and friends who she hasn’t seen in a long time where music, laughter and love will abound. She asked for her children, grandchildren and great grandchildren to celebrate the life she has had here on earth and to know that she will see them all again. Ruth was born on April 19th, 1925 to Henry R. & Edith “Dee Dee” Von Tungeln in El Reno, Oklahoma. She was married to Morris D. Hurst on June 20th, 1943. She grew up on a farm outside of El Reno. In 1956 Morris and Ruth together started Hurst Thrif-T-Wise Food Market where Morris was a prominent butcher and Ruth kept all of the books. During their 50 years in the grocery business, Ruth also worked at Heaston and Wesley Methodist Churches as the pianist/organist, bell choir and children’s music director. Her most important job however was raising their three children. She was a member of the Damrosch Music Club, Philanthropic Educational Organization, United Methodist Women, Wesley United Methodist Church of El Reno and the El Reno Community Chorus. We will remember Ruth’s beautiful smile, her warmth, her energy and the love that she shared with everyone she met. She made a difference in the lives of so many. Her happiest times were those when she would have all of her children, grandchildren, great grandchildren and others at her house for Sunday dinners. She was survived by her brother Phillip Gene Von Tungeln of Sugar Land, Texas, her son Randy Hurst and wife Terri, her daughter Pam Kelleher and husband Mike, and her son Kent Hurst and wife Patti. She is also survived by her grandchildren Chris Kelleher and wife Misti, Julie Phillips and husband Chad, Melodie Duff and husband Jason, Rustin Hurst, Micah Hurst and wife Genta, T.J. Marr and husband Chris, Tera Merveldt and Jason Merveldt; great grandchildren Kenzie Morris and husband Cole, Cooper Kelleher,, Trey Phillips, Tyler Phillips, Cody Phillips, Christian Duff, Jordan Duff, Gavin Duff, Jacob Marr, Josh Marr Tylee Hurst, Madison Trammell, Logan Malone, Davin Malone and Jackson Merveldt; and many nieces and nephews. Her husband of 76 years Morris entered the gates of Heaven just 4 days prior than Ruth. Her parents, Henry R. and Edith “DeeDee” Von Tungeln and three brothers, Harold, Lloyd and Henry Jo, also preceded her in death. A memorial service for Ruth will be held at the Wesley United Methodist Church in El Reno, Oklahoma at 1:00 p.m. on Saturday, July 6th, 2019. Wilson Funeral Home will be handling the arrangements.

VIRGINIA RUTH VON TUNGLEN HURST Virginia Ruth Von Tungeln Hurst was called into Heaven on July5th, 2019. She will reunite with her family and friends who she hasn&#8217;t seen in a long time where music, laughter and love will abound. She... View Obituary & Service Information

The family of Virginia Ruth Hurst created this Life Tributes page to make it easy to share your memories.

Send flowers to the Hurst family.