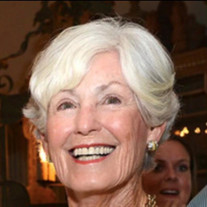 June 11, 1940 - October 11, 2021 OKLAHOMA CITY Virginia Catherine (“Kay”) Porta Bass died on Monday, October 11, 2021. Born in Oklahoma City on June 11, 1940, Kay graduated from El Reno High School in 1958 and attended Monticello College and University of Oklahoma where she was a member of Kappa Kappa Gamma sorority. In 1960, she married her high school and college sweetheart, James (“Jim”) Bass. They spent the first two years of married life at Fort Benjamin Harrison in Indianapolis while Jim finished his service in the Army. Their first child, Ginny, was born in Indianapolis. A few weeks later, the family returned to Oklahoma so Jim could start law school. In 1966, they made their home in El Reno and welcomed their son, Michael. Setting up family life, Kay spent her time with her friends, family, and community. From playing golf on Thursday mornings at El Reno County Club and Mobile Meals with Jane Ratliff to selling Doncaster clothes and traveling the world with Jim and friends, Kay enjoyed the good life. Later they made the move to Oak Tree to be nearer their favorite pastime - golf. In 2004, they moved to Lake Aluma where they delighted in its beauty and the close-knit community. Their photo albums were filled with pictures, many with golf club in one hand and a glass of wine in the other, from Africa, St. Andrew’s in Scotland, to Tucson and an Alaskan cruise. Of her many organizations, Kay was very active in PEO (Chapters M and CK), Athenaeum, El Reno Arts Festival, Oklahoma Humanities Council, El Reno Public School Foundation, and weekly mahjong games at Oak Tree. A parishioner of Christ Memorial Episcopal Church, El Reno, then All Souls' Episcopal Church of Oklahoma City, Kay was also a Pink Lady volunteer at Parkview Hospital in El Reno and a member of the Oklahoma County Bar Auxiliary, Oklahoma City Golf and Country Club and Tucson National. Kay is survived by her daughter, Ginny Bass Carl of Oklahoma City, her husband, Peter Carl, and children, Collin Groves of Houston, and Rachael Groves of Oklahoma City; and son, Michael Bass of Oklahoma City, his wife, Paige, and children, Sam and Sarah Cate. Kay is also survived by her sister, Carol Kleinhoff of Eufaula, AL, her husband, Bill Kleinhoff, and children, Barbara Balkcom of Fishers, IN, her husband, Lee, and children, Lee Junior, Virginia Frances, and Elouise, and Billy Kleinhoff of Dunwoody, GA., his wife Lindsay, and children Abby and Ellie. Kay’s surviving brothers-in-law are Jerry Bass of Edmond, his wife, Abby, and children, Whit Bass of Oklahoma City, his wife, Kelli, and children, McKenzi and Sophia, Katie Bass of Spring Hill, FL, Hilary Jamieson of Bedford, TX, her husband, Sean, and daughter, Blakely, and Jamee Barwick of Ft. Worth, TX; and Andy Bass of Edmond, his wife, Linda, and son, Gabe Bass of Edmond, his wife, Candy, and son, Andy. Kay’s husband, Jim, died in 2015. She is also predeceased by her parents of El Reno, Virginia Barnard Porta and Francis Porta, her brother, Phil Porta, and her half-sister, Yvonne Porta. A special thanks to long-time friends, Mary Jane Armacost, Sherron and Allen Evans, Kay Guftason, Sue and Jerry Hagan, Janice Jensen, Cheryl and George Ramey, and Jon Trudgeon. Memorial contributions may be made to Oklahoma Medical Research Foundation (OMRF) at 825 NE 13th St, Oklahoma City, OK 73104, or www.omrf.org. A Memorial Service will be held at All Souls' Episcopal Church at N.W. 63rd and Pennsylvania Avenue in Oklahoma City on Saturday, November 13, 2021 at 2:00 p.m. Services are under the direction of Wilson Funeral Home, El Reno, OK. Condolences may be made at www.wilsoncares.com

The family of Virginia Catherine Bass created this Life Tributes page to make it easy to share your memories.

Send flowers to the Bass family.