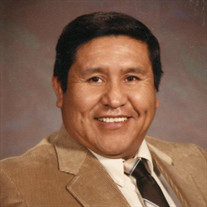 Virgil Roger Surveyor, 86, of El Reno passed away on May 8, 2022, in Oklahoma City. Virgil was born on November 28, 1935, in Canton, Oklahoma to Wisdom and Anne Surveyor. He was one of 7 kids. He attended schools all over, but mainly in El Reno, OK and Denver, CO. He joined the Army in 1958 and was honorably discharged in 1964. From then he attended Southeastern Oklahoma State University where he met the love of his life, Valda. He married Valda Hendrick in May of 1967, and from that union came 4 children: Lorrie, Kevin, Darren, and Julia. He became the principal at Canton Highschool in Okla. , in 1982-83 .He taught in Kansas with the, Kickapoo Tribe, Nebraska with Winnebago Tribe, and Wisconsin with the Menominee Tribe. He is preceded in death by his parents, Wisdom Surveyor, and Annie Sweet Medicine-Surveyor-Lefthand. His wife, Valda Surveyor. His daughter, Lorrie Surveyor-Douglas. His sisters, Peggy Cook, Edith Rice. Brothers, David Surveyor, and Kenneth Surveyor. Half-brothers, Robert Theodore Lefthand and Francis Lefthand, and grandson Cheyenne Douglas. His nephews Charles and Robert Rice. Niece Debbie Lynn. He is survived by his children, Kevin Surveyor, Darren Surveyor, and Julia Sandoval. His sister, Jorene Kathy Lefthand. His grandchildren, Erica Winters (Aaron), Eric Kenrick, Uriah Douglas, Destiny Surveyor, Tyler Surveyor, Joseph Hodges, Ian Douglas, Manuel Sandoval, Malaki and Joshua Jr. Nevaquaya. Step-grandchildren Betty Lynn Moore and Shawn Moore. Great-grandchildren, Malachi Johnson and Nevaeh Johnson. Step great-grandchildren, Oakley Alva (Luis), and Braxton Winters. Nephews (that he raised as his own children,) Darrell and Roger Rice. Virgil, would say things daily like: Finish your dreams or let them finish you. PMA- positive mental attitude, forgive, forgive, forgive, relax take it easy, if you dream it God will bring it to pass. Go for your dreams. Thank you for coming to my funeral. God bless you all.

Virgil Roger Surveyor, 86, of El Reno passed away on May 8, 2022, in Oklahoma City. Virgil was born on November 28, 1935, in Canton, Oklahoma to Wisdom and Anne Surveyor. He was one of 7 kids. He attended schools all over, but mainly in El... View Obituary & Service Information

The family of Virgil Roger Surveyor created this Life Tributes page to make it easy to share your memories.

Send flowers to the Surveyor family.