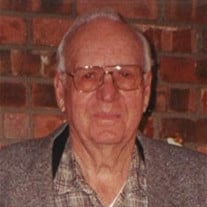 Vardie Lavern Keenon August 17, 1926 – August 15, 2017 Vardie Lavern Keenon passed peacefully into the arms of Jesus on August 15, 2017 at his home in El Reno. Services will be held Saturday, August 19, 2017 at 11:00 A.M. at Ellison Avenue United Methodist Church, 600 S. Ellison, El Reno, OK. Services are under the direction of Wilson Funeral Home. Burial with Military Honors will be in the El Reno Cemetery. Vardie was born in Tishomingo, Oklahoma on August 17, 1926 to Vardie Lee Keenon and Lucy Ellen (Neely) Keenon. The family moved to Fletcher, Oklahoma area by way of a Model T Ford when Vardie was a young boy. Farming was the main livelihood of the family. At the age of 19, he joined the U.S. Army and served in Japan, shortly after the bombing of Hiroshima. After the war, he returned to Fletcher and realised a young girl he had known in school had become a beautiful young woman. This of course was Maxine Revel. Vardie, known as Lavern to the family, and Maxine were married on April 27, 1950 in Fletcher. They remained "stuck like glue" as Vardie was fond of saying until her passing in 2013. Vardie worked as an auto mechanic for a while, then moved to El Reno after an Army buddy suggested he sign on with the Rock Island Railroad. In time, he attained the position of Locomotive Engineer, retiring in 1989. In the late 1950’s, Vardie and Maxine along with Maxine’s brother Rex and wife Lou Revel embarked on a new venture to give El Reno youth a safe and fun place to go, opening the El Reno Roller Rink on north Bickford. Many came to skate, paying just 60 cents. Vardie’s growing up years during the depression were not without struggles, but he acquired a strong desire to raise his family well. Vardie valued a strong work ethic, education, faith in God and family unity. With such, Vardie and Maxine raised their three daughters. Vardie was always ready and willing to help anyone in need. After returning from the railroad, he accepted the position of Canadian County Safety Commissioner, serving there for several years. Vardie’s lifelong love of antique cars became a passion for him. He beautifully restored 2 Model T’s and one Model A Ford. These cars became his trademark as many in town knew him as “The man with the old cars.” You didn’t visit him without taking a ride in one or all of them; or enjoy some of his wonderful homemade peanut brittle! Vardie never lost his penchant for the land and cattle. On his acreage he raised Brangus cattle and vegetable gardens. Vardie and Maxine loved El Reno and were involved with the Canadian County Historical Society, The El Reno Cruisers Car Club and other organizations. They loved their church, Ellison Avenue United Methodist Church and its people very much. He was preceded in death by his parents, his wife Maxine, sisters Estalee Brinkley and Margaret Beth Shawn, and brother Delbert Keenon. He is survived by his daughters Beverly LaBahn and husband Lamar of El Reno, OK, Phyllis Hopkins and Husband Larry of Oklahoma City, OK, and Carol Galloway of Oklahoma City, OK. 5 – Grandchildren, Justin Hopkins of Moore, Jacob LaBahn & wife Jenny of Norman, Joel LaBahn of Denver, Co, Katy Williams & husband Ben of Rosenburg, TX, Michael Galloway & wife Amber of Lawton, OK. 11 Great Grandchildren, Ethan & Caleb Hopkins, Jesse, Keenon, Hudson, Hannah, Liam & Judah LaBahn, Makayla and Jason Williams, and Macie Galloway. Nephew, Robert Revel & wife Sue of El Reno, OK. Sisters-in-law, Lou Revel of Oklahoma City, OK. and Ann Revel of Georgia. And many nieces and nephews. Also by Vardies “handpicked” daughter Teresa Vaughan and husband Ron, who provided loving and compassionate care to all of us. The family suggests memorials be made to the Ellison Avenue United Methodist Church, 600 S. Ellison, El Reno, OK. 73036.

The family of Vardie Laverne Keenon created this Life Tributes page to make it easy to share your memories.

Send flowers to the Keenon family.