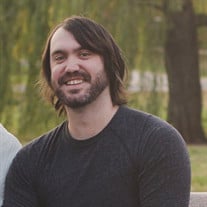 Trevor Austin Tate was called home to the Lord on Monday, November 15, 2021, less than a week before celebrating his 36th birthday. The void his passing leaves is immeasurable. His smile, humor, and laughter could fill a room and win the hearts of everyone in it. To say people were drawn to Trevor is an understatement. His charisma was effortless and genuine. He had a knack for putting others at ease and bringing them out of their shells. Making people laugh was one of his greatest joys and greatest strengths. Trevor was born to Robert and Robin Tate on November 21, 1985, in Plano, TX. Growing up, Trevor lived in Buffalo, OK; Alva, OK; and Woodward, OK. He graduated from Woodward High School in 2004 and moved to Edmond to attend the University of Central Oklahoma. He lived in the Edmond and NW Oklahoma City area until moving to Union City with his wife, Holly, and daughter, Austyn, in 2019. As a little kid, Trevor was rambunctious and competitive. Naturally, he loved and excelled at sports. Especially baseball. His first at-bat in tee-ball was a home run and not the kind where the runner scores while the other four-year-olds are chasing the ball around. Instead, Trevor drove the ball into the outfield and circled the bases like it was the World Series. Trevor was blessed with a quick wit, a soft heart, and a strong will. His purpose in life was to help people find and believe in the best versions of themselves. This was evident in his career as a personal trainer, the countless hours he spent volunteering for the Oklahoma Firefighters Burn Camp, and his willingness to be a shoulder for anyone to lean on. Everyone who knew Trevor knows Holly and Austyn were his world. He was the most amazing father to Austyn, and she adored her daddy. Cooking side-by-side in the kitchen and letting her paint his fingernails were two of their favorite activities together. To her delight, he would wear the nail polish proudly until it faded away or she repainted them. As a family, they enjoyed traveling to Florida twice a year and visiting different ballparks to watch professional baseball games. Austyn's vivid imagination, constant chatter, and sense of humor are just like Trevor's and will be a continual reminder of the light he brought to the world. Trevor brought joy and laughter to everyone he met. His infectious personality and caring nature have left a mark on so many people. The stories and memories that exist in this world because of him are too many to imagine. Trevor is survived by his wife, Holly Tate; daughter, Austyn Tate; father, Robert Tate; Mother, Robin Tate; brother, Tanner Tate and his wife, Kelly; niece, Lorelai Tate; nephews, Rustin Dawson, Ryler Dawson, and Baker Tate; father- and mother-in-law, Mike and Sharon Dawson; brother- and sister-in-law, Ryan and Lacey Dawson; several aunts, uncles, cousins, and extended family members; countless friends; and his English bulldog, Marla Pooch Tate. Trevor was preceded in death by his grandparents, Thad Freeman, Sybil and Ron Horton, Ira Lee and Lee Denke, and Bud and Peggy Tate. In lieu of flowers, please consider making a donation to one of the organizations that meant a lot to Trevor. Oklahoma Firefighters Burn Camp PO Box 287 Owasso, OK 74055 https://www.okffburncamp.com/ OR The Recovery Center 1215 NW 25th St. Oklahoma City, OK 73106 https://www.trcok.com/

Trevor Austin Tate was called home to the Lord on Monday, November 15, 2021, less than a week before celebrating his 36th birthday. The void his passing leaves is immeasurable. His smile, humor, and laughter could fill a room and win the hearts... View Obituary & Service Information

The family of Trevor Austin Tate created this Life Tributes page to make it easy to share your memories.

Trevor Austin Tate was called home to the Lord on Monday, November...

Send flowers to the Tate family.