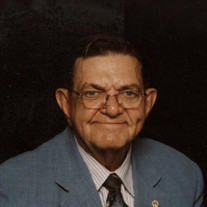 Obituary for Thomas G. Cash Thomas G. Cash was born in El Reno, Oklahoma on March 27, 1934 and passed away Monday, September 12, 2016. He was the son of Mary David Cash McDonald and Albert G. Cash. Tom graduated from El Reno High School in 1952 and soon thereafter began working for the Rock Island Railroad. Shortly thereafter Tom and several of his buddies decided to enlist in the military and Tom became a railroad engineer for the US Army at Ft. Eustis, Virginia. After his military service, he returned home to El Reno where he continued working for the Rock Island Railroad following in the footsteps of his father and older brother. He worked at various railway lines in El Reno, Pratt, Kansas and Enid Oklahoma retiring from the Union Pacific Railroad after 44 years of service. He met Mary June Pearson at First Baptist Church in El Reno in September and were married three months later on December 31, 1960. They were married for 55 ½ years. Tom and June enjoyed traveling all over the world including Europe, Egypt, Morocco, and Israel as well as several island cruises. June was the love of his life. Tom was a faithful member of the First Baptist Church in El Reno where he was a deacon and taught Sunday School for many years. He was a 50+ member of the El Reno Masonic Lodge where he was a past master and held several other offices. Tom served as a Host Helper for the El Reno public schools reading program. He was a member of the American Legion, El Reno Community Chorus, and the Underwood OHCE. He loved listening to classical music, working the daily crossword puzzles and crypto quotes. He is survived by his wife, June Cash, his daughter Mary Beth Cash Carver and her husband Terry Carver of Chickasha, and daughter Shalyn Cash Gallaway of Muskogee. Grandchildren include Cash, Mason and Claire Carver and Brady and Paige Gallaway. He also leaves behind a brother Jimmy Cash and his wife Dorothy and several nieces and nephews. Services will be held at the First Baptist Church, 541 Mercy Drive, El Reno, Oklahoma, Friday, Sept. 16, 2016 at 10:30 AM with burial to follow in the El Reno Cemetery. Memorials can be made to First Baptist Church, El Reno, Oklahoma. Services are under the direction of Wilson Funeral Home, El Reno, OK.

The family of Thomas G. Cash created this Life Tributes page to make it easy to share your memories.

Send flowers to the Cash family.