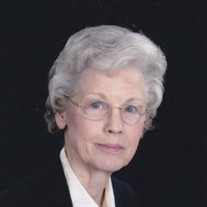 Sue Crowell Rector was born on February 15, 1930 in San Francisco, California. She passed away on April 24, 2016 after a brief illness. Services will be held on Thursday, April 28, 2016 at 10:30 A.M. at Wesley United Methodist Church in El Reno with the Rev. Taud Boatman officiating. Interment will be in the El Reno Cemetery. Services are under the direction of Wilson Funeral Home. On May 14, 1948, Sue married Joe M. Rector, III in El Paso, Texas, where they resided until the family moved to El Reno, Oklahoma in 1963. Sue was a member to Junior League of El Paso during the time they lived there. Sue was very active in Wesley United Methodist Church and has been a member of the church since 1963. She played in the bell choir and was active in many other areas of the church, service as receptionist and also on several different committees. She was a member of PEO Chapter M, Atheneaum Club, UNW Afternoon Circle, and the El Reno Study Club. Sue was also on the Board of Directors of the First National Corp. and the First National Bank and Trust Co. of El Reno. She was preceded in death by her parents, Brig. Gen. and Mrs. E.R. Crowell, her brother, Col. Evans R. Crowell, her sister, Peggy Montague, and her husband, Joe M. Rector III. Survivors include: her four sons, Joe M. Rector, IV and his wife Susan (Sue), of Piedmont, Evans C. Rector and his wife Bette, of Tulsa, Francis H. Rector and his wife Lois, of Yukon and Robert M. Rector and his wife Robin of Missoula, Montana, and a nephew, David Montague and his wife Mary of Houston, TX. She is also survived by eleven grandchildren and fourteen great grandchildren. The family would like to thank Dr. Clinton Strong, Dr. Vivek Kohli, Dr. Lara Theobald, Dr. Steve Drabek, St. Katherine Drexel, and Integris Hospice House and their respective staffs for the wonderful care and compassion shown to Sue over the years and during her illness. The family suggests memorials be made to Wesley United Methodist Church, 101 S. Barker, El Reno, Oklahoma 73036.

Sue Crowell Rector was born on February 15, 1930 in San Francisco, California. She passed away on April 24, 2016 after a brief illness. Services will be held on Thursday, April 28, 2016 at 10:30 A.M. at Wesley United Methodist Church in El Reno... View Obituary & Service Information

The family of Sue Crowell Rector created this Life Tributes page to make it easy to share your memories.

Send flowers to the Rector family.