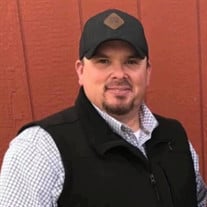 Shawn James Scott, 42, of Banner, Ok left this world to be with his Savior on October 27, 2021. He was born July 6, 1979, in Thomas, Ok to Tom and Diana Scott. Visitation will be on Sunday, October 31, 2021, from 1pm to 6pm. Funeral services will take place on Monday, November 1, 2021, at 2pm at Life.Church in Yukon. Dr. Jeff Hill will be officiating. Graveside services immediately following at El Reno Cemetery. Shawn is survived by his beloved wife, Tiffany Scott, and their five children: Dax James Scott, Sophie Jordan Scott, Elizabeth Rose Scott, Kayla Dawn Scott, and Chase Lane Berg. His parents Tom Scott of Clinton, Ok and Diana Scott of Banner, OK. And his brother, L. T. Scott and wife Sheila and their children Ashley, Erin and Addison of Banner, OK. He was preceded in death by maternal grandparents James and Maxine Radcliff of Banner, OK and paternal grandparents Leo and Gladys Scott of Watonga, OK. Shawn was a Christian man, relying on his faith in his Heavenly Father and sharing his testimony with everyone. He was his wife, Tiffany’s, perfect match, and the best dad to his kids; teaching them how to love hard, work hard and play hard. Shawn was a construction superintendent with Mashburn Faires Homes where he was loved by his bosses, coworkers, trades, homeowners, and anyone in between. He took great pride in his work and continued working full time throughout his battle with cancer. Shawn never met a stranger and always had a smile on his face. His laughter was contagious, as was his positive attitude and good heart. He touched the lives and hearts of everyone that knew him and was an inspiration to many. He will live on in our hearts. “Wherever a beautiful soul has been, there is a trail of beautiful memories.” In lieu of flowers, please consider a donation to the Glioblastoma Foundation to help find a cure.

The family of Shawn James Scott created this Life Tributes page to make it easy to share your memories.

Send flowers to the Scott family.