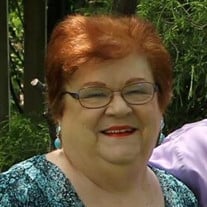 Sharon Yvette Brock joined her Heavenly Father on June 16, 2016. She was born December 24, 1940 in Houston, TX to Vernon and Estulene Myers. Sharon grew up in Baytown with her three sisters and graduated from Robert E. Lee High School in 1959. Sharon went on to graduate from Baylor University in 1963with a degree in Education. She taught school and worked with children until her retirement from Darlington Elementary school in El Reno in 2006. Sharon married Charles Eugene "Gene" Brock on September 10, 1964 in Baytown. During their 51 years together, they lived in various places across Texas, Kansas, and Oklahoma, until settling in El Reno in 1979 with their two children, Anita and Ben. Sharon's heart was always filled with music, and she found great, great joy in teaching many children how to play the piano in each place she called "home." She was also able to share her love of music through singing, with the sweet Adelines and her church choirs, including First Baptist Church of El Reno where she and Gene were long-time members. She was preceded in death by her parents, Vernon and Estulene Myers and sisters, Priscilla Benham and Jill Myers. Survivors include her husband Gene Brock of the home; daughter, Anita Y. Bryant and husband Tim of Cincinnati, OH; son, Bennett W. Brock and wife Jennifer A. of Blackwell, OK; grandchildren, Katherine, Matthew, and Grady Bryant and Lena Brock; sister, Verlene Masters of Baytown, TX; aunt, Sue Parker; sisters-in-law, Gail Greene and June Tidwell; brother-in-law, Edward Brock; and other relatives and friends. Funeral services will be held Monday, June 20, 2016 at 2:00 PM at the First Baptist Church in El Reno with burial to follow in the El Reno Cemetery. Services are under the direction of Wilson Funeral Home.

Sharon Yvette Brock joined her Heavenly Father on June 16, 2016. She was born December 24, 1940 in Houston, TX to Vernon and Estulene Myers. Sharon grew up in Baytown with her three sisters and graduated from Robert E. Lee High School in 1959.... View Obituary & Service Information

The family of Sharon Yvette Brock created this Life Tributes page to make it easy to share your memories.

Send flowers to the Brock family.