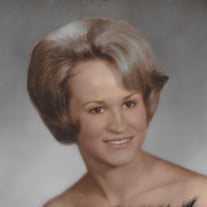 Funeral services for Sandra Kay Beard will be held at 10 o’clock a.m., Monday, June 17, 2019 at First Christian Church with Mrs. Tara Dew officiating. Services are under the direction of Wilson Funeral Home. Mrs. Beard entered heaven on Sunday, June 9, 2019 at Saint Francis Hospital in Muskogee, Oklahoma. She was born January 1, 1946 in Porterville, California. She was a graduate of El Reno High School and a member of First Christian Church. She married Ronnie Joe Beard on October 8, 1965 and raised her family on their dairy farm. She was an active member of the Red Rock and Maple community, always lending a hand to friends and neighbors. After her boys were grown, she became a hairdresser, studied horticulture, and later started a landscaping business with a good friend. Throughout her life, Sandy enjoyed being with family and friends. Some of her favorite activities were fishing, gardening, dancing, and spending time at the lake. Sandy had a love for many things, including animals and the outdoors. Sandy was preceded in death by her parents: Charles Dewey & Delores (Sain) Kessler, and her sister: Nancy Kessler. Survivors include three sons: Micheal Beard & wife Shelly, Scott Beard & wife Michelle, Charlie Beard & wife April all of Calumet, Oklahoma. Sandy was blessed with eight grandchildren and two great-grandchildren. Grandchildren: Derrick Beard, Desiree Trujillo and husband Ignacio, Delynna Beard, Delainna Beard, Cameron Beard, Conner Beard, Kenzie Beard, and Massey Beard all of Calumet, Oklahoma. Great-grandchildren: Adrianna and Mia Trujillo. Friend and companion: Tom Bosler and numerous other relatives and dear friends.

The family of Sandra Kay Beard created this Life Tributes page to make it easy to share your memories.

Funeral services for Sandra Kay Beard will be held at 10 o’clock...

Send flowers to the Beard family.