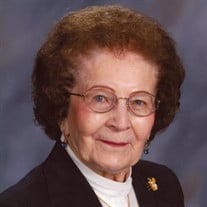 Ruth Kostruha Roberts Reusser was born September 17, 1923 in Grand Rapids, Michigan to Rosie (Strouhal) & Charlie Kostruha. Ruth had a younger sister, Alice. The family moved to El Reno, Oklahoma when Ruth was a child. Ruth graduated from El Reno High School in 1943, where she was awarded Homemaker of the Year. In her senior year, she enrolled in a program to be trained to work on planes at Douglas Aircraft. Immediately after graduation, she went to work at Douglas, wiring C-47 cargo planes for WWII. This is where she met her future husband, Jess Roberts, the plant superintendent. Ruth and Jess married in 1944. The couple had 4 children: Jim, Jean, Casey and Mary. Jess passed away in 1991. Ruth married Ed Reusser in 1996. The couple attended Wesley United Methodist Church in El Reno. Ed passed away in 2007. Ruth’s father immigrated to the United States from Czechoslovakia in 1913. Her mother, Rosie, was born in Willow OK, to Czech immigrants. She was very proud of her Czech heritage, never missing the annual Czech Festival in Yukon dressed in her traditional Czech costume. As an adult, Ruth fulfilled a lifelong dream by taking a trip with her family to Czechoslovakia to visit her parent’s homeland and several cousins. She loved organizing the annual Strouhal Reunion, so she could visit with her Czech family every year. A favorite memory of her childhood was when she would ride bareback on her horse on the dirt road to get the mail and ride in a wagon across the fields to visit her cousins. Ruth was a longtime resident of El Reno. She and husband Jess were accomplished farmers and later in life owned Gifts-n-Things gift shop on Sunset Dr in El Reno. Even in her early 90’s, she enjoyed checking cattle, riding in the tractor, and riding in the combine at wheat harvest. Most of all, she enjoyed the time she spent with family, while she was living with daughter, Jean, on her Christmas tree farm in Yukon. Ruth was preceded in death by her parents Rosie & Charlie, sister Alice & brother-in-law Kenneth Kenaga, niece Rose Ann Kenaga Meador, husband Jess Roberts, Great-Grandson Jesse Gorbet, husband Ed Reusser and many of her Czech cousins. Survivors include son Jim (Pam) Roberts, daughter Jean (Mike) Collins Holdaway, son Casey (Sabrina) Roberts, daughter Mary (Jay) Thomas. Grandchildren: Monica (Wes) Brower, Jeff (Tina) Roberts, Denise (Chris) Bromlow, Jennifer Newlin, Christi (Vance) Collins Keen, Mike (Shelly) Collins, Josh Holdaway, JoAnna Roberts, Kris (Adrienne) Kilhoffer, Kevin (LeAnna) Kilhoffer, Katie (Shane) Hacker, Chris Thomas, Jason (Iris) Thomas and Ryan Lawson, as well as many great-grandchildren. Visitation will be from 1:00pm to 6:00pm, Sunday January 9th at Wilson Funeral Home. Services will be at 2:00 Monday, January 10th at Wesley United Methodist Church in El Reno, OK In Lieu of flowers, please donate to the Yukon Czech Hall at 205 N Czech Hall Rd Yukon OK 73099 or to the Alzheimer’s Association act.alz.org

The family of Ruth Mary Kostruha Roberts Reusser created this Life Tributes page to make it easy to share your memories.

Send flowers to the Reusser family.