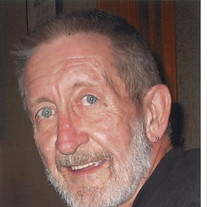 Ronald Lee Jackson, 77, died Monday at his El Reno home. Ronald Lee Jackson was born Oct. 31, 1938 in Okla. City to Jaunita (Froneberger) and Merlyn Floyd ("M.F.") Jackson. He graduated from El Reno High School in 1957, where he was drum major for the award-winning EHS band, and earned an associates degree from El Reno Junior College. Ron completed his education as an electrical engineer at Oklahoma State University and remained a lifelong Cowboys fan. Ron married Bina McWethy on June 12, 1960 and together they had four children. The couple divorced in 1981. Ron had a long career in aviation, beginning with employment by Sandia National Laboratory in Albuquerque. He later relocated to Yukon OK and began work on the Aero Commander aircraft for Rockwell International and Gulfstream Aerospace in Bethany. Eventually, Ron was employed by the defense electronics corporation E-Systems in Greenville TX, where he contributed designs to retooling the instrument panel for Air Force One aircraft. Ron returned to El Reno, and on Oct. 22, 1993 he married Sharon Bailey, who survives of the home. He enjoyed small town life, including working in the automotive department of Wal-Mart and caring for his elderly mother. He became a loving and guiding influence in the lives of his stepdaughter and her family. Ron was an avid fan of El Reno little league soccer, and he was a skilled bowler and illustrator. His favorite pastimes included spending time in the countryside listening to music and talk radio. He was fond of western movies and Louis L'Amour books, and reading about history. In addition to his wife, Sharon, Ron is survived by his family in El Reno: stepdaughter Amanda (Rocky) Thompson and her children Sharidee, Jordan and Sierra; and by his daughter Robin (David) Oldham and sons Jackson and Tag of Oswego, KS; son Rhett (Donna) Jackson and children Madeline and Stephen of Norman; son Rodney Jackson of Yukon; and daughter Rhonda Jackson and her daughter Tabitha Talley of Yukon. Ron was preceded in death by his parents and his sister, Sandra Sue Wagner. A Celebration of Life is set for Monday, Oct. 31 at 10 a.m. in the chapel of Wilson Funeral Home, El Reno. Cremation has already taken place. In lieu of flowers, the family has requested that donations be made to El Reno Mobile Meals. P.O. Box 879 El Reno, Oklahoma 73036.

The family of Ronald Lee Jackson created this Life Tributes page to make it easy to share your memories.

Send flowers to the Jackson family.