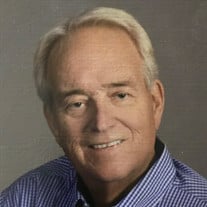 On Friday, January 3, 2020, Richard “Buddy” Kamm passed away at the age of 70. Buddy was born on December 25, 1949 to Richard and Lorene Kamm in El Reno, OK. He graduated from El Reno High School in 1968 where he loved playing football and making memories with friends. He later received an associates degrees from El Reno Community College. Prior to graduating High School, Buddy worked at Canadian Valley Transit Mix with his father. He then started working for the Federal Bureau of Prisons in 1979 and through career advancements, relocated to six different facilities along the east coast before returning to El Reno FCI in 1994, where he later retired in 2004. Several years after retirement from the BOP, he started working for the City of El Reno as the Airport Manager and worked there until his death. Buddy married Jennifer Johnston on July 28, 1973 and had two boys Brad and Patrick. After a divorce in 1994, Buddy later met and married Judith Kamm on May 25, 2001 and gained a daughter, Jennifer White. Buddy enjoyed working around his farm, tinkering with a variety of projects, being actively involved with his church and spending time with family. Buddy never met a stranger and was known for his fun personality and quick-witted sense of humor. Buddy was preceded in death by his father, Richard, and his mother, Lorene. He is survived by his wife, Judy Kamm, his children Brad Kamm, Patrick and his wife Mandy Kamm and Jennifer White, six grandchildren, Bailey Kamm, Gauge Kamm, Sophie Kamm, Tennison Kamm, Sheperd Kamm and Tucker Kamm. A memorial service will be held on Friday, January 10th, 2020 at the Wesley United Methodist Church at 1:00pm. The family will be receiving guests prior to the service at 12:00pm in Wesley’s Fellowship Hall. In lieu of flowers, donations may be made to Mobile Meals, LifeShare Oklahoma or to a charity of your choice in his honor.

The family of Richard "Buddy" Kamm created this Life Tributes page to make it easy to share your memories.

Send flowers to the Kamm family.