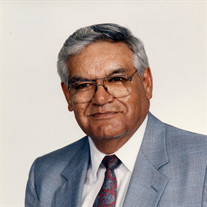 Ralph Lopez Rosary Services for Ralph Lopez of Minco will be held at 7:00 pm Wednessday, March 29, 2017, in Wilson Funeral Home Chapel. Mass of Christian Burial will be held at 10:00 am Thursday, March 30, 2017 in St. John’s Nepomuk Catholic Church. Father Rex Arnold will officiate. Interment with Military Honors will be held at the El Reno Cemetery in El Reno, Oklahoma. Services are under the direction of Wilson Funeral Home. Ralph Lopez passed away on Thursday, March 23, 2017 in his home with his family by his side. He was born on November 7, 1930 in Richard Spur, Oklahoma. Ralph had lived in Yukon from 1975 to 1988 before moving to Minco where he has resided since. He was a graduate of Central High School and had taken some college courses. Ralph has served in the U.S. Army during the Korean Conflict and then re- enlisted with the U.S. Air Force. He was a farmer. He was a member of the Masonic Lodge, V.F.W. and St. John’s Nepomuk Catholic Church. Ralph loved to fish, doing woodworking, going camping, and traveling but really enjoyed spending time with his family and friends. He was preceded in death by her parents: Pete & Julia (Guerrero) Lopez. His Twin Brother Ernest Lopez and another brother Emanuel Lopez, 5 Sisters: Connie Hinojosa, Juanita Garcia, Mary Jaime, Lula Riel, Sophia Roberts-Dillon. Survivors include: His wife Judith ‘Judy’ (Gholston) Lopez of the home. Son: Michael Lopez & wife Whitney of Minco, OK. Daughter: Monica Puente & husband Henry of Yukon, OK. Brother: Joe Lopez of Oklahoma City, OK. Sister: Rosemary Fogel and husband Kenneth of Edmond, OK. 1 – Grandson: Khristphor, Numerous other nieces and nephews and other relatives and friends. Memorials may be made to the American Cancer Society 6525 N Meridian Suite 110 Oklahoma City, Ok. 73116 or St. John’s Nepomuk Catholic Church 600 Garth Brooks Blvd. Yukon, Ok. 73099.

The family of Ralph Lopez created this Life Tributes page to make it easy to share your memories.

Rosary Services for Ralph Lopez of Minco will be...

Send flowers to the Lopez family.