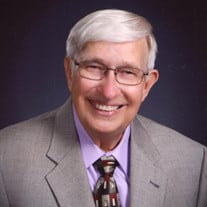 Owen H. Major was guided by the angels to his new home Sunday November 29, 2020. A true gentleman to the core who loved the lord and his family. He will be missed but his legacy will live on. We rejoice in his life, his love and strength that he showed to others. He was a man of his word and stood by his convictions. He would like for you to remember there is only one happiness in this life, to love and to be loved. He was born July 11, 1934 to Owen Olaf & Katie Cleo Hudson Major, in Altona, Oklahoma. He attended Loyal Schools and played on the basketball and baseball teams and was junior master farmer in the FFA. He was married to Frances Kochenower in 1953. In this union four children were born Stanley Kent, Sandra Karlita, Sherylynn Leona, Joseph Frances. He worked various jobs and then added the National Guard which he became a Master Sergeant. He joined Peoples National Bank in 1957 which became Interbank and has worked with the same bank for 63 years. He was a charter member of the Kingfisher Jaycees in 1959 and received the Distinguished Service Award. He was membership chairman of Kingfisher Lions club and later became President. He was always staying active in the Kingfisher Methodist Church filing many responsible positions as needed in the church membership. Always with a smile on his face. Owen married Louann Davis in 1975 and helped raise her children James and Sara. He served all the offices in Kingfisher Junior Chamber of Commerce becoming President in 1964. He was named Outstanding Young Man of America in 1965. Owen was raised as a Master Mason in 1962. Masonry became a large part of his life at this point. He was Master of Kingfisher lodge #52 3 times. He was a plural member with India Lodge #551. He was a certified Screener and helped with the children with vision testing in the Kingfisher schools for many years. He was Scottish Rite of Freemasonry since 1987 (32 Degree KCCH). He was a perpetual member of India Shiner’s Oklahoma City, OK. He was a life member of the Provincial Grand Lodge of the United States of America, the Royal Order of Scotland. He was a member of the White Buffalo Club. In 2005 he was Grand Chaplain for William E (Bill) Owen. He received the highest honor available to a Mason the Metal of Honor in 2014. He was a 58 years Mason. The best portion of a good man’s life is his little nameless unremembered acts of kindness and of love. He had a passion for Eastern Star and was initiated in 1964. He along with his Mother participated in many activities continuing his Masonic heritage. He has served as Worthy Patron 12 different times during his lifetime, in Kingfisher, Blanchard and AREME chapters. He became Worthy Grand Patron with Jan Hanna in 2002 and formed The Honey Bears Grand Family. They traveled all over the United States and Canada spreading Eastern Star love with a smile on his face. He was Finance Chairman for General Grand Chapter OES for eight years for Sister Barbara Benton Most Worthy Grand Matron and Brother William E. (Bill) Owen Most Worthy Grand Patron. He was honored to have been in 13 different Grand Families over the years and loved every mile he traveled. He was a 56-year Eastern Star. Owen met the love of his life in 2009 at Blanchard Chapter and swept her off her feet and made Donna Babb his wife in 2010. Donna and Owen were great friends for many years. They traveled many places during their marriage, enjoying each other’s companionship. Donna is survived in the home. Owen was very blessed with a wonderful large family Six children, 14 Grand Children, 34 Great Grand Children and 12 Great-Great Grand Children. He is also survived by his sister, Shirley Fritzler of Two Buttes, Colorado, aunt, Catherine Taylor of Star, Arkansas, uncle, Max Hudson of Shawnee, Oklahoma, and numerous nieces and nephews. He was adored by his family and will be greatly missed. Only a moment you stayed but what and imprint your footprints have left on our hearts. A memorial service will be held at 2:00 p.m., Friday, June 4, 2021 at Scissortail Crossings Event Center (210 E Will Rogers Dr., Kingfisher, OK 73750). Services are under the direction of Wilson Funeral Home- Kingfisher.

Owen H. Major was guided by the angels to his new home Sunday November 29, 2020. A true gentleman to the core who loved the lord and his family. He will be missed but his legacy will live on. We rejoice in his life, his love and strength that... View Obituary & Service Information

The family of Owen Major created this Life Tributes page to make it easy to share your memories.

Owen H. Major was guided by the angels to his new home Sunday...

Send flowers to the Major family.