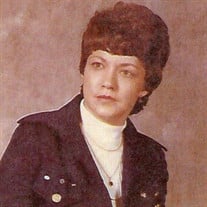 Nelda Louise (Rousey) Pearce was called home by her Heavenly Father on July 26, 2020, in Norman, OK. Nelda was born October 26, 1942, in Purcell, OK, to Alvie and Nellie Rousey. She grew up in Lexington and Purcell, OK and graduated from Lexington High School in 1961, attended the Banking and Business School in Oklahoma City, OK , 1961-1962. Nelda worked as a bookkeeper and receptionist and also was co-owner of J & E Trucking and Pearce Bail Bonds in El Reno. Nelda loved to do crafts of all kinds, especially quilting, and crocheting,reading, watching old TV shows, her favorite being the old Perry Mason shows. She loved and enjoyed her children and grandchildren. Nelda was a member of Southern Heights Baptist Church in El Reno. Nelda and Jack were members of the VFW and a Paid Up for Life Member of the American Legion Post 34, El Reno. She was married to Richard King and had three children; Venita, Kevin and Cyndy. Nelda married Jack Pearce in 1976 and they were married until his death in 2001. Nelda was preceded in death by her parents, Alvie and Nellie Rousey, brother Harold Rousey, Richard King, husband Jack Pearce, grandson Daryl Burke, and son in law Dan Douglas. She is survived by brothers Keith and wife Brenda Rousey of Ft.Worth, TX, Herbert and wife Janna Rousey, Slaughterville, OK, daughters Venita Douglas, Cyndy King, son Kevin King, grandchildren Christina, Shelbie, Jamie, greatgrandchildren Lexy, Clay, Jackson and Sophia Iris, all of Oklahoma. Nelda and her family want to give special thanks to Russell Murray Hospice, El Reno, OK, and Herb and Janna Rousey for their loving care of her during her illness. In lieu of flowers she requested that you donate to the Russell Murray Hospice of El Reno. Graveside services will be held at 10:00 a.m., on Wednesday, July 29, 2020 at the El Reno Cemetery with Pastor Ray Idell Officiating. A come and go viewing will be held Tuesday, July 18 from 9:00 a.m. to 8:00 p.m., at Wilson Funeral Home.

Nelda Louise (Rousey) Pearce was called home by her Heavenly Father on July 26, 2020, in Norman, OK. Nelda was born October 26, 1942, in Purcell, OK, to Alvie and Nellie Rousey. She grew up in Lexington and Purcell, OK and graduated from... View Obituary & Service Information

The family of Nelda Louise Pearce created this Life Tributes page to make it easy to share your memories.

Nelda Louise (Rousey) Pearce was called home by her Heavenly...

Send flowers to the Pearce family.