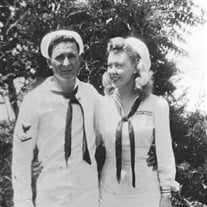 Morris Dean Hurst Morris Hurst peacefully left his earthly home for his eternal home in Heaven on July 1, 2019 with the family at his side. Morris was born on April 5, 1921 to George and Nettie Hurst in Calumet, Oklahoma. He attended was a graduate of El Reno Public High School and El Reno Junior College. He worked at Allison’s Grocery and Market before marrying Virginia Ruth Hurst at Heaston Church on June 20, 1943 and promptly left for the Philippines with the United States Coast Guard during World War II. While he was stationed in the Philippines, the United States dropped the atomic bombs on Hiroshima and Nagasaki in August 1945. In 1946 returned to El Reno where he and Ruth began their family, working again at Allison’s Market for a short time before being hired at Charles White’s Grocery. Shortly after, Mr. Kelso hired him to manage his Village Market. Mr. Kelso also owned a clothing store in downtown El Reno. In 1950 Morris ventured into business on his own, buying a building in the Fair Addition district of El Reno and calling it Hurst Grocery. In 1956 he bought nearby Cooksey’s market and later Glass Grocery, expanding his services. He maintained hundreds of charge accounts for families all over town allowing them to buy groceries throughout the month until they would receive their paychecks. Also during this time he began supplying all of the fried onion burger restaurants with their meat and other supplies. (Johnnies, Roberts, Bobs, Darrels, etc.) Being known for selling fine meats, he also took over selling Hensley’s Family Restaurant all their steaks, hamburger meat, etc. He and Ruth continued this business at “Hurst Thrif-T-Wise Food Market” until his retirement about 1990 after almost 50 years in the grocery business in El Reno. During this time he also served on the Canadian County Excise Tax Board for many years, the El Reno Zoning Board, the Board of Adjustments and served on the El Reno School Board for 18 years and on the Board of Regents for the El Reno Junior College/Redlands Community College for over 20 years. Morris was an extremely avid OU fan, attending many football and basketball games over the years, and also greatly enjoyed hunting and fishing. In his later years, he enjoyed spending time on his farms, raising cattle and growing wheat. Recently Morris celebrated his 76th wedding anniversary with his wife, Virginia Ruth Hurst. Awaiting Morris in Heaven were his parents, George and Nettie Hurst, his brothers, Lester Hurst, Arthur Hurst, Harlan Hurst and his sister, Katy Palmer. Following him in Heaven is his wife, Virginia Ruth Von Tungeln Hurst. Surviving family members include his son, Randy Hurst and wife Terri of El Reno; daughter, Pamela Kelleher and husband Michael of Norman; son, Kent Hurst and wife Patti, of Calumet. Grandchildren include Melodie Duff and husband Jason; Rustin Hurst; Micah Hurst and wife Genta; Chris Kelleher and wife Misti; Julie Phillips and husband Chad; TJ Marr and husband Chris; Tera Merveldt; Jason Merveldt. Great Grandchildren are Christian Duff, Jordan Duff, Gavin Duff, Tylee Hurst, Kenzie Morris, Cooper Kelleher. Trey Phillips, Tyler Phillips, Cody Phillips, Jacob Marr, Josh Marr, Logan Malone, Madison Trammell, Logan Malone, Davin Malone and Jaxon Merveldt, as well as many nephews and nieces. Arrangements handled by Wilson Funeral Home, El Reno, OK. Viewing will be Friday, July 5, 12:00 Noon until 8:00 PM. Services will be on Saturday, July 6, 2019, 1:00 PM at the Wesley United Methodist Church, 101 S. Barker Ave, El Reno OK Following will be the graveside service at the El Reno Cemetery. Donations to the Wesley United Methodist Church of El Reno or Russell-Murray Hospice of El Reno are requested in lieu of flowers.

Morris Dean Hurst Morris Hurst peacefully left his earthly home for his eternal home in Heaven on July 1, 2019 with the family at his side. Morris was born on April 5, 1921 to George and Nettie Hurst in Calumet, Oklahoma. He attended... View Obituary & Service Information

The family of Morris Dean Hurst created this Life Tributes page to make it easy to share your memories.

Send flowers to the Hurst family.