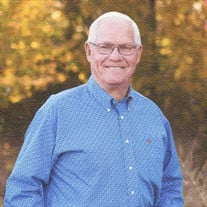 Arthur “Max” Castonguay was born April 19, 1939 to Arthur and Earnestine Castonguay in Kingfisher, Oklahoma and passed away August 2, 2020. Max attended Omega School and graduated in 1957. Following his graduation, he began farming from 1957-1989. He owned and operated MC Castonguay Trucking from 1989 until his retirement in 1995, after his retirement he began managing rental properties. Max enjoyed being involved in the community and was on the Hospital Board, School Board, and CO-OP Board. He was an active member of the Church of Nazarene. In 1959 he married Marie Storm and from their marriage came three sons, Ronnie, Terry, and Darin Castonguay; they lost Marie and Ronnie to cancer in 1987. In 1989 he married Carol Bollenbach and welcomed four more sons- Bob, Steve, Darrin, and Troy Bollenbach. Carol and Max shared 31 wonderful years together. Max leaves behind to cherish his memory, his wife, Carol Castonguay; sons, Terry Castonguay and wife Sherry, Darin Castonguay and wife Jacki, Bob Bollenbach and friend April Odell, Steve Bollenbach and wife Melanie, Darrin Bollenbach and wife Kimberly, and son Troy Bollenbach; sisters, Betty Langford, Wilma Wood, and Wanda Christ; 19 grandkids and 17 great-grandkids. He is preceded in death by his parents, Arthur and Earnestine Castonguay; wife, Marie Castonguay; Son, Ronnie Castonguay; and brother Raymond Castonguay. A memorial service to honor the life of Max will be held at 10:30 a.m., Saturday, August 8, 2020 at Kingfisher Church of the Nazarene. Services are under the direction of Wilson Funeral Home- Kingfisher.

The family of Max Castonguay created this Life Tributes page to make it easy to share your memories.

Send flowers to the Castonguay family.