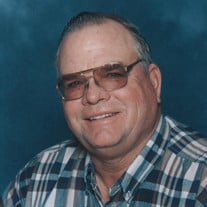 Martin Conrad Peters, Sr., born November 10th, 1938, went to be with Jesus on February 15th, 2021. He passed peacefully in his home with his wife of 60 years, Lanoy Ann Peters, by his side. Martin was born on his family farm in Okarche, OK as the 5th of 5 children. Martin was baptized November 27, 1938 in the St. Johns Lutheran Church of Okarche, OK. On January 27th, 1961, Martin was married to Lanoy Ann Peters (Bolin) at the Bible Baptist Church in El Reno, OK by pastor Jerry Ervin. They celebrated their 60th Wedding Anniversary this year. Martin loved the Lord and faithfully attended church with his wife at the Trinity Lutheran Church in El Reno, OK. He heard his last sermon from Pastor Aaron Kotila through the internet on February 14, 2021. Martin graduated from Okarche High School May 18, 1956. He was involved in FFA and played some baseball. Lanoy will always remember him as a loving and romantic man who said he knew he would marry her from the first moment he saw her. A giving man who would surprise her with flowers and special gifts. Lanoy will cherish the many love letters and poetry he wrote her while overseas. Martin was an Army Veteran and served overseas when the Berlin Wall was being built. He worked for OG&E as a Top Lineman for 36 years. He started Martin Peters and Son Roofing around 1970 and worked alongside his son for many years. After retiring he settled down at the family farm where he lived until his passing Martin coached little league t-ball, football and baseball. He loved ice cream and his football, especially the Oklahoma Sooners. He enjoyed fishing, camping, and water-skiing. He took his family to see Yellowstone National Park, the Grand Canyon, and to see Oklahoma Passion Play and Shepherd of the Hills in theater. He enjoyed watching Bold and Beautiful and The Andy Griffith Show. Martin was a loving husband, father, grandfather and great-grandfather and will be greatly missed. Eternity is just one heartbeat away. Martin is survived in death by his wife, Lanoy Ann Peters (Bolin), daughter Deborah Lynn Faloon (Peters) and spouse Mark David Faloon, son Martin Conrad Peters Jr. and spouse Tammy Lynn Peters (Hays); grandchildren Angelo Delgado Austin Marshall and spouse Morgan Leigh Marshall (Gill) Ashley Marie Scott (Marshall) and spouse Jimmy Joe Paul Scott, Ryan Conrad Peters and spouse Briley Engillena Peters (Schweiter); Great-Grandchildren: Dacota Sherri Rain Johnson, Johnny Dalton Storm Johnson, Conrad Robert Peters, Charles Kenneth Peters, and Finley Mae Marshall. Martin is preceded in death by his parents Henry Rudolf Peters and Emma Frances Caroline Peters (Thiems), his brothers Emil Werner Peters, Adolf Peters, Rudolf Peters; sister Josephine Louise Peters Wilkerson; and grandson Christopher Barrett Marshall. A full service to honor the life of Martin will be held at 10:00 a.m., Tuesday, February 23, 2021 at the El Reno Trinity Lutheran Church. Burial will follow in the St. John’s Lutheran Cemetery. Come and go viewing will be held at the funeral home Sunday, February 21 from 1:00 p.m. – 6:00 p.m. and Monday, February 22 from 8:00 a.m. – 8:00 p.m. Services are under the direction of Wilson Funeral Home. In Lieu of flowers memorial donations can be made in Martin’s name to the El Reno Trinity Lutheran Church.

Martin Conrad Peters, Sr., born November 10th, 1938, went to be with Jesus on February 15th, 2021. He passed peacefully in his home with his wife of 60 years, Lanoy Ann Peters, by his side. Martin was born on his family farm in Okarche, OK... View Obituary & Service Information

The family of Martin Conrad Peters Sr. created this Life Tributes page to make it easy to share your memories.

Send flowers to the Peters family.