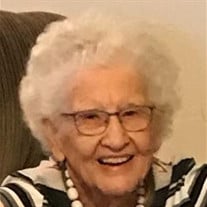 While at home and surrounded by family, Martha Kroeker, age 97, left this world and entered heaven on April 17, 2018. Born to John F. and Aganetha Ediger Friesen in Corn, Oklahoma, she was the third youngest of eleven children. She married her sweetheart, Wesley Kroeker, in 1939, and together they had two daughters. Mrs. Kroeker was an amazing woman who demonstrated a life of love to her family, church and community. Martha was a homemaker who worked alongside her husband on their farm. Her boundless energy and big heart led her to volunteer at her daughters’ school, at the hospital as a “Pink Lady”, and also in children’s ministry at the various churches she attended. She enjoyed socializing through the Home Demonstration Club and the Friendship Club. Martha was a fantastic cook who would always have family favorites on hand during the holidays. She was an avid golfer into her 90’s playing at El Reno Country Club and with the Surrey Hills Women’s Golf Association. She was a fan of game shows, golf and OSU. She was a longtime faithful member of First Baptist Church in El Reno. Martha was preceded in death by her parents; her beloved husband of 72 years, Wesley Kroeker; nine brothers and sisters; and son-in-law, Charles Feuerborn. Survivors include her sister, Mandy Hoock; daughters, Judy Novosad (Victor) of Kingwood, TX and Jean Feuerborn of Yukon; grandchildren: Suzanne Stricklin (Clark), Clinton Novosad (Sherry), Cynde Fail (Mike), Brian Price, and Brandon Hensley (Janet); great-grandchildren: Jonathan (Leticia), Nick, Erin (Chris), Danielle, Taylor, Jordan, Kelsea, and Ethan; great-great-grandchildren: Kayden, William, David, Ollie, Anastasia, and Ashlin; and other relatives and friends. While we celebrate that her absence from her body means she is present with the Lord, we will greatly miss her. Funeral services will be held Friday, April 20, 2018, at 10:00 a.m. at First Baptist Church, El Reno, with burial to follow in the El Reno Cemetery. Services are under the direction of Wilson Funeral Home, El Reno. Memorials may be made to First Baptist Church, El Reno building fund, 541 Mercy Dr., El Reno, OK, 73036 or American Diabetes Association, donations.diabetes.org. Viewing will be held Wed. 4/18/18 from 5-8pm and Thurs. 4/19/18 from 8am-8pm at Wilson Funeral Home.

While at home and surrounded by family, Martha Kroeker, age 97, left this world and entered heaven on April 17, 2018. Born to John F. and Aganetha Ediger Friesen in Corn, Oklahoma, she was the third youngest of eleven children. She married... View Obituary & Service Information

The family of Martha Kroeker created this Life Tributes page to make it easy to share your memories.

While at home and surrounded by family, Martha Kroeker, age 97,...

Send flowers to the Kroeker family.