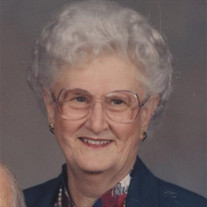 Come-and-go visitation will be from 9am-8pm on Monday, November 26th at Wilson Funeral Home. A service honoring Mrs. Cavin's life will be at 2:00pm on Tuesday, November 27th at Bible Baptist Church in El Reno. Margaret Mae (Lucas) Cavin passed away Thursday, November 22, 2018, at St. Katherine Drexel Assisted Living in El Reno. She came to St. Katherine's in 2013 after living in her home in El Reno for 72 years after moving from Kansas with her husband and two children. Margaret was born in Nashville, Kansas on December 5, 1919, to Ernest and Grace Lucas. Her father was a farmer and her Mother was a homemaker. While in high school she excelled at playing basketball and continued her love for the game while watching the Oklahoma City Thunder. After she graduated high school she began working as a telephone operator in Nashville. She met her future husband, Harold Newton (Newt) Cavin while working part time as a waitress in a local cafe operated by the owners of the telephone company. Harold and Margaret were married on March 27, 1940, and they were married for 65 years prior to Newt's death in 2005. Harold was drafted into the Army in December 1944 and returned in 1946, at which time they moved to El Reno where he learned the auto body repair trade and eventually had a wrecker service also. Margaret was a avid homemaker and relaxed by working in her vegetable garden and beautiful flower beds. While her two daughters were in high school, she made numerous trips with the choirs and band to music contests as a chaperone. She loved making these trips with the kids. One of the greatest joys of her life was listening to the girls play the piano. She would later join Harold in the business office where she worked as a secretary/bookkeeper and wrecker dispatcher until they retired in 2004. Margaret loved seeing the wreckers and would often join Harold in driving out to watch the wreckers work on accident scenes. Margaret was a faithful member of Bible Baptist Church where she taught Sunday School for many years. Margaret was preceded in death by her parents, one brother Dean Lucas, son-in-law Kenneth Singleton, and a brother-in-law Ellis Hostmeyer. She is survived by two daughters Jeanie Singleton of Chickasha, and Judy and husband Wayne Albrecht of El Reno. She is also survived by Grandchildren Kendall and wife Jo Singleton of Chickasha, Boyd and wife Tammy Singleton of Chickasha, Carrie (Singleton) Daugherty and husband Travis of Oklahoma City, Darren and wife Eniko Albrecht of Waterford, MI and Bryan and wife Lisa Albrecht of El Reno. Great-Grandchildren Morgan and husband Jared Bratcher of Chickasha, Kate Singleton of Alexandria, VA, Kalyssa Singleton of Dallas, TX, Heather and husband Daniel Ramirez of Chickasha, Brandon and wife Katie Doughty of Cyril, Tanner and Ethan Daugherty of Oklahoma City, Jackson Albrecht and Jonathan Albrecht of El Reno, and Zita Albrecht, Charlie Albrecht and Daniel Albrecht all of Waterford, MI. Great-Great Grandchildren Jaxon Bratcher, Jaelynn and Kaydence Ramirez, Easton and Joslyn (East) Doughty. She is also survived by one sister, Mary Grace Hostmeyer of Henryetta, OK and many friends and relatives. The family would like to extend heartfelt thanks and appreciation to the staff at St. Katherine's for the care and love provided. Also, thanks to Russell-Murray Hospice and Dr. Clinton Strong. Funeral service will be held Tuesday, November 27, 2018, at Bible Baptist Church under the direction of Wilson Funeral Home and burial at El Reno Cemetery.

The family of Margaret Cavin created this Life Tributes page to make it easy to share your memories.

Come-and-go visitation will be from 9am-8pm on Monday, November...

Send flowers to the Cavin family.