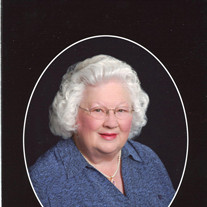 Le Reta Daydreon Hansen, 86, passed away peacefully on January 3, 2018. She was born in Kingfisher, Oklahoma on August 2nd, 1931 to Cecil and Clyde Clark. Daydreon graduated from El Reno, high school in May of 1949. Daydreon married Clyde Theodore Hansen on April 12, 1952 at the Calumet United Methodist Church in Calumet, Oklahoma. Daydreon and Clyde were married 44 years before Clyde passed away in 1996. They made their life together on the family farm North of Calumet, Oklahoma. Daydreon attended the Calumet United Methodist Church with her family and served in many roles there over the years, including leadership in the United Methodist Women, youth leader in the 60’s and 70’s and as Historian of the memorial committee. Daydreon was also actively involved in the Canadian County Farm Bureau. Daydreon is preceded in death by her husband, Clyde Hansen and her parents' Cecil Evelyn Hudson, Clyde Cecil Clark, her step-father, Steven Roy Hudson and her sister Vera Zmuida. Survivors include her children, Tamara Hopkins, Sheryl Hoffman, Mary Jones all of Oklahoma City, Steven Hansen of Calumet, a sister Royolia Howard of Hinton, Oklahoma and a brother Gary Clark of Florida. She is also survived by 5 grandchildren, Chad Hoffman and his wife Dera, Abbie Morgan and her husband Ryan, Lori Hoffman, Christa Briney and her husband Paul and Gabrielle Jones. Daydreon has 7 great- grandchildren, Jeremiah, James, Joseph and Joy Briney, Starla and Hunter King and Mercy Morgan. Viewing will be Friday, January 12, 2018 at Wilson’s Funeral Home from 8:00 AM – 8:00 PM. The Funeral Service will be Saturday, January 13, 2018 at 10:00 a.m. at the First United Methodist Church in Calumet with interment at Canadian Valley Cemetery. In lieu of flowers donations can be made in the memory of Daydreon Hansen to the Calumet United Methodist Church Memorial Fund. Family and friends may send memories and condolences to the family online at www.wilsoncares.com.

The family of LeReta Daydreon Hansen created this Life Tributes page to make it easy to share your memories.

Send flowers to the Hansen family.