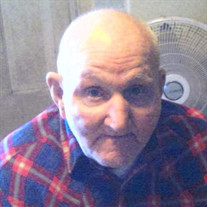 Leonard Dale Wilkerson passed away Sept. 26, 2017 at his home in El Reno. He was born April 8, 1929 in Banner, OK to Harry and Lulu (Schumacher) Wilkerson. Leonard served his country in the U.S. Army, post WWII. He married Josephine Peters... View Obituary & Service Information

The family of Leonard Dale Wilkerson created this Life Tributes page to make it easy to share your memories.

Send flowers to the Wilkerson family.