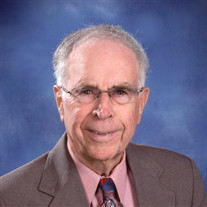 “The good Lord took a liking” to L.A. Spurlin. L.A was born to A.D. and Fern Spurlin and grew up in El Reno with his two brothers and best friends, Richard and Ron Spurlin. L.A. helped with his parents’ tractor dealership, Spurlin Sales on Route 66. He graduated from El Reno High School and Oklahoma City University where he was proud to be a Lambda Chi Alpha. After returning from service in the Navy, he met the love of his life, Corky, living in El Reno, and they were married in 1950. He took over the dealership his father began and took the business to new heights selling CASE and Massey Ferguson to farmers all over Oklahoma and out of state for the next forty years. He and Corky had three children, Debbie, Rod, and Sherri. He loved taking his children on adventures to the lake, and road trips across the country. His greatest bragging rights came when he became Papa to his grandchildren, Rip, Tawni and Sheradee. Today his family has grown to nine great grandchildren, Cadyn, Marley, Macy, Callie, Harper, Ryder, Maelee, Livvie and Rhett. He loved treating the whole crew to fried onion hamburgers any chance he had. As all of El Reno witnessed, L.A. was a magnetic personality, he never met a stranger, and was a friend to everyone. In his close to eighty years in El Reno, he influenced generations at Wesley United Methodist Church, greeted friends as a member of the Elks for decades, and built friendships and community with his fifty years in the Amity Club. He served El Reno as a city councilman, chamber of commerce member, and Vice Mayor. When he retired in the early 90s, he remained a busy body who loved to tinker and work on his farm. He and Corky took the big RV just about anywhere they wanted to go. They explored every corner of the country with each other and sometimes with friends and Corky’s sisters and their husbands. They spent a lot of time in Colorado which they both loved. He was great on his feet! When he was dancing, water skiing or snow skiing, he made the rest of us look completely average. What we love most about him and his big personality is that he lived life to its fullest every day, and shared himself with everyone, especially his family. He always had a smile and a one liner to make other people smile. L.A. found joy in every day and on every dance floor, he was everyone’s favorite dance partner, and we’re all exceptionally blessed to have had a beautiful dance through life with him.……Until we dance again. Laverne Allen Spurlin May 29, 1927-February 18, 2019

&#8220;The good Lord took a liking&#8221; to L.A. Spurlin. L.A was born to A.D. and Fern Spurlin and grew up in El Reno with his two brothers and best friends, Richard and Ron Spurlin. L.A. helped with his parents&#8217; tractor dealership,... View Obituary & Service Information

The family of L. A. Spurlin created this Life Tributes page to make it easy to share your memories.

Send flowers to the Spurlin family.