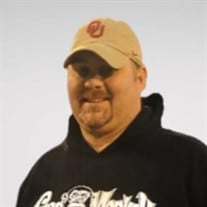 On Tuesday, November 17, 2020, Kris Kuehn, passed away at the age of 43. Kris was born on July 9, 1977 in Okarche, OK to Fred and Betty Kuehn. He graduated from Watonga High School in 1996 and immediately started his love working in the oilfield for John Thompson. Kris had a passion for outdoor fun. He loved to ride his razor with a large group of friends exploring new places, rivers, creeks, and hills…maybe even sometimes where they didn’t have permission. He loved going to Lake Eufaula and spending time on his boat, Lunch Money, and enjoying some Keystone Light with countless friends and family. However, nothing beat the time he spent on the lake fishing with his dad where they would solve the world’s problems. He tried his best to rid the world of coyotes when he could and made sure the world knew of his success in that feat and other things through social media. Anyone that knew Kris knew he was always going to the have biggest and the baddest of whatever it was, regardless of the cost. He had an extreme passion for OU football and didn’t mind showing his displeasure for their bedlam rival. His easy-going personality was infectious to all in his company, as anyone could easily see his love for people. This was true for his family, as well. Despite having occasional hardships, as all families do, those closest to him have mentioned several times of his expressions of love for his siblings, parents, and especially his nieces and nephews. When it came to children, Kris was an incredible gentle giant and often found himself as the favorite uncle. Kris did have a lady in his life, his sweet boxer, Abby. Those two loved driving down back roads and sharing McDoubles together. Kris was preceded in death by his grandfather, Emil Loosen. He is survived by grandmother, Dorothy Loosen; father, Fred; mother, Betty; his sister, Kim; brother, John and wife Rachel; brother, Mitchell and wife Rebecca; and several nieces and nephews, Kasey, Rylee, Kennedy, Annabelle, Cooper, Henry; and his boxer, Abby. Come-and-go viewing will be at Wilson Funeral Service at 1612 S. Main St. in Kingfisher, OK from 1:00-6:00pm on Sunday, November 22nd, and 9am-8pm on Monday, November 23rd. A funeral service will be held at 10:00am on Tuesday, November 24th, 2020 at the Sts. Peter and Paul Catholic Church in Kingfisher, OK under the direction of Wilson Funeral Service, Kingfisher. Burial will be at Resurrection Memorial Cemetery in OKC following services. Flowers may be sent to Wilson’s Funeral Home or donations made to the Sts. Peter and Paul Catholic Church. Forever remembered. #KINGOFTHEHASHTAGS

On Tuesday, November 17, 2020, Kris Kuehn, passed away at the age of 43. Kris was born on July 9, 1977 in Okarche, OK to Fred and Betty Kuehn. He graduated from Watonga High School in 1996 and immediately started his love working in the oilfield... View Obituary & Service Information

The family of Kristopher Kuehn created this Life Tributes page to make it easy to share your memories.

Send flowers to the Kuehn family.