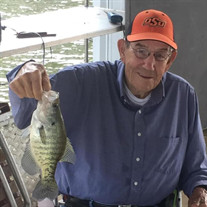 Kenneth Theodore Tipton, 92, of Okarche, Oklahoma passed away on January 1st, 2022 at Mercy Hospital in Kingfisher after experiencing declining health over the last few years. He was born on September 20, 1929 near Fairland, Oklahoma to George Wallace Tipton and Lucy Evalena (Harbaugh) Tipton. Kenneth was born into a large family with meager means. Playmates were brothers, sisters, cousins, nephews and nieces. His playground was the hills and streams of the Hickory Grove area of Northeastern Oklahoma and his toys were what could be created with his imagination since money and resources were scarce. Fishing, hunting, swimming, climbing and “adventures” filled his days where shoes were an extravagance. Resourcefulness was an admirable trait in those difficult times and families banded together to provide for each other. He admired his “Uncle Will” Harbaugh who served as a provider, mentor and role model for young Ken. Kenneth attended the little Hickory Grove School House through the 8th grade and remained connected with the Hickory Grove community throughout his life contributing time, skills and money to the maintenance of the old schoolhouse, gym (now Community Center) and the cemetery. After graduating from Hickory Grove, he attended Fairland High School where he graduated in 1947. He always felt like a “country” kid going to school in the “city” of Fairland. He recognized that was an odd notion since Fairland remains a small town of a few hundred residents, but it was his perception. After graduating high school, Kenneth traveled and worked in numerous states and jobs. He was working in California when he was drafted into the Army in 1951 during the Korean War. He went through training at Camp Rucker, Alabama after which he was deployed to France and then Germany in preparation for deployment to Korea. After his discharge in 1953, he found work at Sheffield Steel in Sand Springs, Oklahoma. It would be a job that would shape his life. During this time, he met his future wife, Lois Ann Wojahn, on a double date setup by his cousin on a visit back to Fairland. Lois and Kenneth were soon engaged and then would marry on May 28, 1954. Lois and Kenneth setup home in west Tulsa along the “Sand Springs Line” and later in Sand Springs where they started a family and became active in the community. Kenneth took advantage of the GI Bill training and opportunities available at the “Mill” to expand his skills and education and became an Electronic Technician and later Supervisor in the technical areas of the operation. He was always amazed with new technology and worked hard to understand and apply new innovations. His “resourceful” childhood and willingness to learn combined well to create clever solutions to difficult problems and made him a “Go To” problem solver regardless of the area or the problem. As his family grew, he became involved in the community and giving of his time as Little League Commissioner, Coach, Foster Dad, Exchange Student Dad and often friend to many that had no friends. He and Don Sullivan were instrumental in starting the Armco Credit Union (now Green Country Credit Union) for “Mill” employees. He and Lois were proud of being part of the faithful followers that started St. Andrew Lutheran Church in Sand Springs. He felt it was a big turning point in his journey with Christ. After an early retirement opportunity from Armco / Sheffield in the early 80’s, Ken began a much busier life working as a technical consultant on numerous projects tied to the Mill and his network of friends that “just needed a little bit of help”. He also found time to work on his sons’ numerous projects and travel the country following OSU baseball. After the passing of his beloved Lois in ’97, Ken found his time filled with visiting children, grandkids, extended family and reconnecting with childhood friends in the Hickory Grove area. As part of this busy social schedule, he kindled a relationship with Florene Meyer Cox during a family get together. Florene and her family quickly welcomed Ken (since Florene was also Lois’ cousin) and they were married in 2005. Kenneth and Florene rotated between homes in Okarche, Sand Springs and Hickory Grove depending on the time of year and what mood struck them. They would eventually settle in Okarche where Ken felt a connection with the community and the rhythm of farming life. He often was arm deep in a “project” while finding plenty of time to wet a line in the pond. He quickly made new friends and joined St. John’s Lutheran Church and its wonderful congregation. His Okarche family kept him busy with their many activities and new technical “problems” to be checked out. They were loving and generous with their time and effort as Kenneth’s needs increased as he aged. They were always available at a moment’s notice no matter the time of night or day or whatever was happening on their schedules. Their love and compassion were immeasurable. Kenneth is survived by his wife Florene Tipton (Meyer Cox) of Okarche. His sons Carl (Cindy) and Gordon (Tracy). Grandchildren Bryson Tipton, Lauren Tipton (John), Kristen Martin (Lee), Renee Ritchie (Josh) and Karlie Collins (Grant). Great Granddaughter Lucy Collins. Okarche family: Lynn Riley (Mike), Diane Grellner (John), David Cox (Barb), Phillip Cox (Liz) and numerous Okarche Grandchildren and Great Grandchildren. He was preceded in death by his parents, nine siblings, wife Lois and Son Kirk. Services will be 10:00a.m. Wednesday, January 5th at St. John’s Lutheran Church in Okarche followed by graveside service at Hickory Grove Cemetery at 3:30p.m. with reception and meal to follow at Hickory Grove Community Center. Viewing will be held at Wilson Funeral Home (1612 S. Main, Kingfisher, OK 73750) on Tuesday, January 4 from 12:00 p.m. – 8:00 p.m. family will be greeting friends from 6:00 p.m. – 8:00 p.m. Services are under the direction of Wilson Funeral Home- Kingfisher. In lieu of flowers, the family asks that donations be made for the preservation of the Hickory Grove Community Center and School. Please send to Mike Tipton, Attn: HGCC, 24149 S. 600 Rd., Grove, OK 74344.

Kenneth Theodore Tipton, 92, of Okarche, Oklahoma passed away on January 1st, 2022 at Mercy Hospital in Kingfisher after experiencing declining health over the last few years. He was born on September 20, 1929 near Fairland, Oklahoma to George... View Obituary & Service Information

The family of Kenneth Tipton created this Life Tributes page to make it easy to share your memories.

Send flowers to the Tipton family.