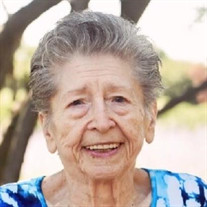 Kathryn Sue McEuen of El Reno, born in Eufaula Okla. June 28th, 1934 left to be with the Lord July 17th 2016. She was preceded in death by her husband of 47 years, Jerry Lee McEuen and her parents Jewel & Katie Brewer of Eufaula, and one sister Betty Elaine Williams. She is survived by one Sister Delores Deanie Kucish, one Brother William Brewer and wife Lou. A Daughter Susan Byers & husband Dale; Son Jerry Walt McEuen & wife Theresa; Daughter Karen Gibson & husband Mike. Along with Eleven grandchildren and seventeen great-grandchildren. She was devoted to her family, they were the most important things in the world to her. Her heart was consumed with love for her children, grandchildren, and great-grandchildren. She was very involved in Rainbows before graduating and marrying the love of her life Jerry. Kathryn worked many years at Montgomery Wards and retired to care for Jerry. After his passing she went to work at Wal-Mart for 10 years until her health began to fail her. During Kathryn’s and Jerry's 47 years of marriage she was a Girl Scout and Boy Scout leader; she held varying offices and volunteered for the PTA; she served as home room mother numerous times. She was the regional cookie chair for girl scouts with a garage and house full of cookies. She bowled for many years, was an avid reader, and a talented seamstress and loved to travel. She was a member of the Tri-City Red Hats; The Blanchard Bodacious Babes Red Hats; Larkspur Garden Club; Christian Women’s Association and Noveau Livre Book Club. Many of these clubs she held various positions. Kathryn was a great woman who was an unwavering role model and example of personal character, love, strength and kindness for all who knew her. Her memory will endure in our hearts and those of the many who loved her. She will be deeply missed. We are comforted by the knowledge she is a child of Christ and currently resides in Heaven with Him. Her faith in Jesus Christ was evident throughout her life. She is a member of Heritage Family Baptist Church, 600 N. Mustang Road Tuttle, where Larry Steverson will officiate the services Thursday July 21st 2016 at 2 P.M. with burial to follow in the El Reno Cemetery. Viewing will be at Wilson Funeral Home, El Reno. Services are under the direction of Wilson Funeral Home, El Reno, OK.

Kathryn Sue McEuen of El Reno, born in Eufaula Okla. June 28th, 1934 left to be with the Lord July 17th 2016. She was preceded in death by her husband of 47 years, Jerry Lee McEuen and her parents Jewel & Katie Brewer of Eufaula, and one sister... View Obituary & Service Information

The family of Kathryn Sue McEuen created this Life Tributes page to make it easy to share your memories.

Send flowers to the McEuen family.