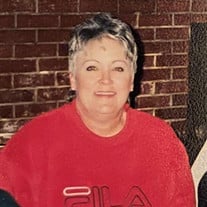 Graveside services from Karen Blanton Daughety will be held at 10 a.m. on Saturday July 10, 2021, at Red Rock Cemetery with Pastor Paul Roach officiating. Services are under the direction of Wilson Funeral Home of El Reno. Karen was born July 22, 1947 in El Reno, Oklahoma to Clarence “Finley” and Gretchen (Kitson) Blanton. She passed away on Friday July 2, 2021, in Oklahoma City at the age of 73. Karen was the daughter of a US Air Force Lt. Colonel and in her younger years they moved to different states for her father’s air force duties. She spoke many times of memories that she had of living in Springfield, Massachusetts and Roswell, New Mexico. She graduated from El Reno High School in 1965. On June 16, 1967 she married Gerald “Butch” Daughety. Butch and Karen made their home in El Reno and went on to have 2 children, Kyle and Lauri. Karen’s biggest jobs in life were raising her kids, and as she would say, her job as a domestic engineer. In 1999, Karen gained the title of Mimi with the birth of the 1st of 3 grandsons. These boys were the light of her life (along with her golden doodle, Molly). Karen is survived by her husband of 54 years, Butch Daughety of the home; one son, Kyle of Yukon; one daughter, Lauri and husband Mike Bone, grandsons Ethan, James, and Brylee all of El Reno; stepmother, Norma Blanton of Hot Springs, Arkansas; brothers and sisters in law, Charles and Vicki Daughety, Rick and Donna Daughety, Jayne and Kelly Crawford, Teresa Kelly, Danny Daughety, many nieces and nephews; Kyle’s special caregivers and namely Kyle Baker, who has been caring for Kyle for more than 20 years. Karen was preceded in death by her parents; sister in law, Charlene Elliott; brother in law, David Daughety; brother in law, Dennis Kelly; 2 nieces and 1 nephew.

Graveside services from Karen Blanton Daughety will be held at 10 a.m. on Saturday July 10, 2021, at Red Rock Cemetery with Pastor Paul Roach officiating. Services are under the direction of Wilson Funeral Home of El Reno. Karen was born July... View Obituary & Service Information

The family of Karen C. Daughety created this Life Tributes page to make it easy to share your memories.

Graveside services from Karen Blanton Daughety will be held at...

Send flowers to the Daughety family.