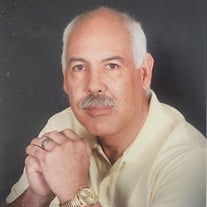 On Saturday, June 11, 2022, Jon &#8220;Chris&#8221; Christopher Hurley passed away at the age of 61 from lasting effects of covid. Chris was born in Los Angeles on February 24, 1961 to Jon and Lynn Valliere and resided in Oklahoma after his... View Obituary & Service Information

The family of Jon "Chris" Christopher Hurley created this Life Tributes page to make it easy to share your memories.

Send flowers to the Hurley family.