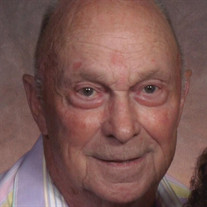 Thomas James (Jim) Davis passed away Oct. 13, 2017 at his home in El Reno. He was born April 30, 1932 in El Reno to Thomas and Mable (Williams) Davis. Jim Davis of Calumet and Lillian Marie Stangl of Okarche were married Dec. 12, 1950, at the Catholic Church of Calumet. They lived in and around Calumet for 18 years, two years in Portola, CA, and the last 47 years in El Reno. Jim worked as a mechanic and drove a propane truck for M & M Gas of Geary while managing several dairies, plus farming for his parents. After moving to El Reno, he worked for Schulte Oil Company and Hahn Trucking as a driver and mechanic until retiring in 1994. Jim was preceded in death by his parents; 4 brothers, Arnold, Floyd, Raymond, and Richard Davis; 4 sisters, Pauline Spurr, Mildred Kennedy, Thelma Hurst, and Ruth Ellison. Survivors include his wife of 66 years, Lillian of the home; 6 children, Marilyn Keever and husband Alan of OKC, Bill Davis and wife Pam of Choctaw, Carolyn Duncan and husband Ron of Calumet, Larry Davis of Wichita, KS, Steve Davis and wife Kristi of Tyler, TX, and Sharon Lake and husband John of Center, MO; 17 grandchildren and 17 great grandchildren. Viewing will be held at 1:00 P.M., Saturday, Oct. 14, 2017 at the funeral home. Funeral services will be held at 2:00 P.M., Saturday, Oct. 14, 2017 at the Wilson Funeral Home Chapel with burial to follow at the Canadian Valley Cemetery, Calumet. Memorials may be made to the Wounded Warrior Project at www.woundedwarriorproject.org. Services are under the direction of Wilson Funeral Home.

The family of James "Jim" Davis created this Life Tributes page to make it easy to share your memories.

Send flowers to the Davis family.