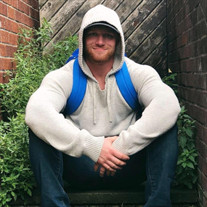 It is with deep sorrow and much love that the family of Jackson Ross Phillips announce his passing on July 16, 2021. Jackson was born July 14, 1993, in Cerritos, California. Jackson moved with his family moved to Woodward Oklahoma in 1996 where he then attended Woodward Public Schools while also studying at High Plains Vo-tech and became state certified welder. Following his graduation in 2012, he joined in the Marine Corps and was stationed at Camp Lejeune, NC where he earned a full retirement after receiving his medical discharge. At the time of his passing, Jackson was working as an apprentice electrician in Oklahoma City. Jackson will be lovingly remembered by his wife, Misti Dawn Michelle Phillips; mother and stepfather, Heidi and Mark Gambill; father and stepmother, Travis and Jennifer Phillips; brother Gary Phillips; nephew, Kael; his dog, Kai, his cat; Athena; and many other friends and relatives. Jackson was preceded in death by his grandparents Will Roy and Betty Ann Heinrich, Travis Phillips Sr., and Donna Phillips. Jackson had a genuine love of life and enjoyed a variety of hobbies and interests. He was a professional body builder, motorcycle enthusiast, avid gamer. He enjoyed traveling abroad, gardening, cooking, and playing with his pets. Jackson had a kind, fun and loving spirit and would give the shirt off his back to aid someone in need. Above all else, Jackson loved his very best friend and older brother Gary. Though he left us far too soon, he left this world a better place and will be remembered in the hearts of so many who loved and cherished him. A celebration of life will be held at Wilson Funeral Home in El Reno, Oklahoma on Wednesday, July 21, 2021 at 10:30am. In leu of flowers, please make a donation to the Wounded Warriers Project in Jackson’s name.

It is with deep sorrow and much love that the family of Jackson Ross Phillips announce his passing on July 16, 2021. Jackson was born July 14, 1993, in Cerritos, California. Jackson moved with his family moved to Woodward Oklahoma in 1996... View Obituary & Service Information

The family of Jackson Ross Phillips created this Life Tributes page to make it easy to share your memories.

It is with deep sorrow and much love that the family of Jackson...

Send flowers to the Phillips family.