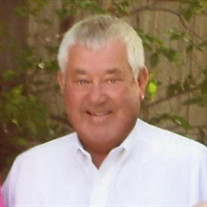 J.C. Kunneman passed away in Okarche on September 8, 2017 at the age of 79. He was born on November 25, 1937 in Kingfisher, Oklahoma to Ernest and Anna (Schieber) Kunneman. J.C. graduated from El Reno High School in 1955 and went on to attend Oklahoma State University. He received his Bachelor's degree in Business Administration from OSU in 1959. He was baptized and confirmed at Trinity Lutheran Church in El Reno, and later moved his membership to St. John's Lutheran Church in Okarche. He married Janyth Lowe on May 6, 1961 in Winfield, Kansas. J.C. was a member of the Kingfisher County Cattlemen's Association and the Kingfisher County Wheat Growers. J.C. lived in Okarche his entire life, and had a passion for farming. He died doing what he loved to do. J.C. worked hard but played harder. He loved people and OSU basketball. What restaurant he was eating at next was always of upmost importance. J.C. enjoyed giving away his homemade jerky at Christmas time to all of his friends and family. He was preceded in death by his parents. Survivors include his wife, Janyth, of the home; his daughter, Kayla Hammer and husband Philip, of Panhandle, Texas; son, Lance Kunneman and wife Donna, of Okarche; grandchildren Sarah Harlan and husband Andrew, Macy Kunneman, Travis Hammer and wife Jacy, and Zachary Kunneman; and friends, Scott and Debbie Winters, Whitney Stroh and Wager Winters. Viewing will be held Sat., 9/9/17 from 6-8pm and Sun., 9/10/17 from 1-6pm at the funeral home. Funeral services held Monday, September 11, 2017 at 10:30 a.m. at St. John's Lutheran Church in Okarche with burial to follow at St. John's Lutheran Cemetery. Memorials in memory of J.C. may be made to St. John's Lutheran Church, PO Box 66, Okarche, OK 73762 or El Reno Mobile Meals, 200 N. Country Club, El Reno, OK 73036. "I was born to be a FARMER...It's a partnership...a working partnership with the good Lord Almighty. Without Him, it could not be done. It is His divine guidance that gets me through each season from planting to the harvest. Through the storms and the drought, the highs and the lows. Some say it's a gamble but to me, it's a way of life because...I was born to be a FARMER." Services were under the direction of Wilson Funeral Home, El Reno, OK.

J.C. Kunneman passed away in Okarche on September 8, 2017 at the age of 79. He was born on November 25, 1937 in Kingfisher, Oklahoma to Ernest and Anna (Schieber) Kunneman. J.C. graduated from El Reno High School in 1955 and went on to attend... View Obituary & Service Information

The family of J.C. Kunneman created this Life Tributes page to make it easy to share your memories.

Send flowers to the Kunneman family.