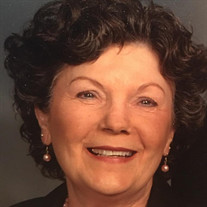 Iris Ann Marcum was born in Claremore, Oklahoma and grew up in the small community of Sageeyah. She helped her family on the farm where they raised corn, wheat, cattle and pigs. She was the youngest of five children. She attended school in a two room schoolhouse where she was fortunate to have her mother as her teacher. She later moved to Claremore to attend school. She met her highschool sweetheart, Gene Marcum and they were married on December 24, 1955. They were married almost 65 years. Together they had four children, Kavin, David, Melody and Marsha. They lived in Claremore for 5 years until Gene went to work for Phillips Petroleum Company, which took them to Wyoming, Texas and eventually Elkhart, Kansas in1966. Her fondest memories included watching her children participate in baseball, basketball, football, track and cheerleading. She became quite an expert at cleaning uniforms and numerous messes that four busy teenagers created. The friendships that were formed in Elkhart continued throughout her life and sincerely held a special place in her heart. In 1977, they relocated to Kingfisher, Oklahoma and soon joined the First Baptist Church. She enjoyed singing in the choir, helped prepare and serve funeral dinners, and also made many visits to shut-ins. She was a participant in the Intercessory Prayer Group for 25 years until she had to give up this ministry when her health began to fail. In Kingfisher, she worked for Pioneer Telephone Company as a Cashier and in the Engineering Department. She made many close friends at Pioneer. She stayed close to those friends until she passed. She then retired in 1995. In 2006, Iris joined the Kingfisher County Republican Women’s Organization where she was involved in fundraising and working at the County Fair. Her hobbies were quilting, sewing, and baking desserts for people that she cared about. You know you were ‘special’ if you ever received a loaf of her homemade banana bread, Italian Cream Cake or German Chocolate Cake. She was most proud of the quilts she was able to make for each of her grandchildren. She and Gene loved traveling in their travel trailer throughout the United States with friends. They cherished the friendships they made during these trips. Most of all, Iris loved her family and grandchildren who affectionately called her Meme. Iris is preceeded in death by her son, David Marcum, her parents, her sisters Ruth Patrick and Nell Griffin and brother, Conde Green. She is survived by her beloved husband Gene of 65 years, her children and their spouses: Kavin and Kim Marcum of Tyler, TX; Melody and Paul Boeckman of Tulsa, OK; and Marsha and Jim Mueggenborg of Kingfisher, OK. Iris also leaves behind her grandchildren: Hailey & Mitchell Weigt, Brittany Marcum, Niki & Greg Black, Jamie & Dustin Griffin, Tanner & Carrie Mueggenborg, Cody Broyles, Cole & Erin Broyles and Brooke Marcum. She has 10 great-grandchildren and also leaves behind her brother, George Green and sister-in-law, Judy Green. Additionally, Iris leaves behind a host of nieces and nephews, dear friends, and church family who were so much a part of her beautiful heart. A funeral service for Iris will be held at 10:00 a.m., Monday, September 27, 2021 at First Baptist Church Kingfisher with Pastor Scott Watkins officiating. Burial will follow in the Woodland Cemetery in Claremore, Oklahoma at 3:00 p.m. In lieu of flowers the family ask that donations be made to Russel Murray Hospice in memory of Iris.

Iris Ann Marcum was born in Claremore, Oklahoma and grew up in the small community of Sageeyah. She helped her family on the farm where they raised corn, wheat, cattle and pigs. She was the youngest of five children. She attended school in... View Obituary & Service Information

The family of Iris Ann Marcum created this Life Tributes page to make it easy to share your memories.

Iris Ann Marcum was born in Claremore, Oklahoma and grew up in...

Send flowers to the Marcum family.