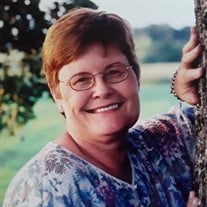 How would it be to have the name Grace, be the perfect example of that name and pass through the gates to see our Savior? That’s what happened Thursday, February 25, 2021 for Grace Marie Whitcraft. A memorial celebrating her Amazing life will be Saturday, March 6, 2021 @ 1:00pm at Trinity Baptist Church, 1201 E. Rogers, El Reno, officiated by Brother Rod Young. Grace Marie was the firstborn to Wilbur Harland and Lorene Lawrence in Peculiar, Missouri on September 28, 1946. She later became “Sis” upon the births of little sister Peggy and brother “Little Harland”. In her parent’s backyard, on the Missouri/Kansas stateline, on September 15, 1968, she married the love of her life, Donald Whitcraft, thus becoming his son Donnie’s extra Mom. Their wedding took place during a 15 day live from the Army. Don left too soon after that to serve in Vietnam. During his tour, their oldest daughter was born. Grace braved being a new parent while worrying about her husband overseas for nearly a year before his return. A little over a year later they welcomed their youngest daughter. Together they remodeled nearly all of the many homes they lived in during their 50+ years of marriage. They moved to Oklahoma in 1974 to live and work at Ft. Reno. Grace worked several years as a bookkeeper at El Reno Lumbar. But her happiest times were with children. She had a home daycare here in El Reno and later worked in a daycare while living at Lake Texoma. She also taught Sunday school for many years at First Christian Church, El Reno. Most recently she taught the 4 and 5 year class at Trinity Baptist El Reno. As much as her students loved her, none could love her as completely as her own children, grandchildren and great grandchildren. “Gran” baked and decorated countless birthday and wedding cakes for those she loved and there were many. She might be best known for her Texas cake. She was the kind of person that if she had been given notice from God on Wednesday, she would have baked a cake and probably cinnamon rolls too, for her own memorial service. Grace was also gifted in caring for and bringing comfort to loved ones in their final days. So much so, she was lovingly known to those closest to her as “The Finisher”. She was preceded in death by her parents Wilbur Harland and Melorene Lawrence, in-laws Donald Sr. and Bernice Whitcraft and brother in-law Larry Morrow. She is survived by her devoted husband Donald, children Donnie & wife Alicia Whitcraft, Dawn & husband Wayne Muir, and Stacy & husband Grant Chaney; grandchildren Jamie Page, Jesie & wife Christine Whitcraft, Jodie Whitcraft, Chris & Kenzie Muir, Zack and Hope Muir, River Adkins, Lindsey & husband Chris Buckaloo, Kodee & wife Kaitlyn Chaney, and Cheyanne Chaney; and 15 cherished great grandchildren. She is also survived by sister Peggy & husband Dave Henderson and brother Harland “Doc” & wife Donna Lawrence. Also in-laws David & Doretta Whitcraft, Donice & Jerry Parker, Debbie Morrow, Doug & Susie Whitcraft, Dean & Patti Whitcraft and an abundance of cousins, nieces, nephews and Uncle Roy Hodgson. She is completely transformed now and has taken on the glow of her Jesus! Glory to God that He loves her, and all of us, so much!

How would it be to have the name Grace, be the perfect example of that name and pass through the gates to see our Savior? That&#8217;s what happened Thursday, February 25, 2021 for Grace Marie Whitcraft. A memorial celebrating her Amazing... View Obituary & Service Information

The family of Grace Marie Whitcraft created this Life Tributes page to make it easy to share your memories.

How would it be to have the name Grace, be the perfect example...

Send flowers to the Whitcraft family.