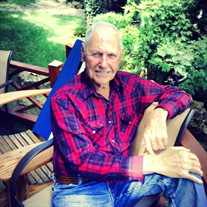 Gideon Tinsley was born to William Henry Tinsley, and Sally Pearl (Wright) Tinsley on April 5th, 1927 in Hinton, Oklahoma. Gid attended Eakly schools, until he left school early, not graduating so he could lie about his age to join the Navy in May 1945, where he mostly served on the USS Duluth visiting Japan, Hawaii and China. During his naval service, Gid was awarded the Victory Medal. Gid was honorably discharged from the Navy in July, 1946 with the rank of Seaman, Second Class. It was after Gid returned from the Navy that he began to seriously pursue the love of his life, and his best friend Verda Lea Buie. Gid & Verda were married on December 12th, 1947 in Wheeler Texas in a double wedding with Verda Lea’s cousin. Settling down in life, Gid attended the Veteran’s Agricultural School, and went to work for the Rock Island Railroad in 1952, finally settling in El Reno in 1954. Gid did eventually get his GED, and went on to become a Farmer, Rancher and eventually successful land developer. Gid was a man of many accomplishments. Gid served two terms as the Canadian County Commissioner, from 1968 to 1974, before serving in the State Senate for two terms, from 1974 to 1982. Gid was Vice President of the Association of Central Oklahoma Government, President of the El Reno Chamber of Commerce in 1974. He also served on the Darlington School Board for 9 years, and during that time helped build the new school. Gid was blessed with a large and loving family. Gid and Verda Lea were blessed with 2 children, Pamela Tinsley Cox of El Reno, Oklahoma and Randall Tinsley of Arlington, TX. Gid is survived by his wife Verda Lea, his daughter Pamela, his son, Randall, 4 grandsons Chad Cox and his wife Dana of El Reno, Jeff Cox, and his wife Season of Oklahoma City, Dwayne Tinsley and his wife Tiffany of Oklahoma City, Cory and his wife Erin, of El Reno, his granddaughter Angie Martin, and her husband, Lance Martin of Oklahoma City; 10 Great Grand Children, Brittani Fudge, and her husband Anthony Fudge, of El Reno, Carston, and Keaton Cox of Yukon, Addison and AJ Cox of Oklahoma City, Lauren Martin of Oklahoma City, Tylar, Colin, Gavin & Parker Tinsley of El Reno, and 3 Great - Great Grandchildren, Aspen, Ayvah, and Andie of El Reno and his sister Opal Rogers of Washington. Gid is preceded in death by his parents, 4 brothers, Rincy, Daniel, Travis and Paul, his 4 sisters Elvis, Eldie, Edna, and Esther, and His daughter in law, Cheryl Tinsley. Gid (and Verda Lea) shared an incredible 74 years of marriage, have been members of Trinity Baptist Church for 65 years, and have created a wonderful legacy and example of faithfulness, love, and commitment for their family and friends. In lieu of flowers please consider donations to Russell Murray Hospice, or Trinity Baptist Church, El Reno Oklahoma.

Gideon Tinsley was born to William Henry Tinsley, and Sally Pearl (Wright) Tinsley on April 5th, 1927 in Hinton, Oklahoma. Gid attended Eakly schools, until he left school early, not graduating so he could lie about his age to join the Navy... View Obituary & Service Information

The family of Gideon Tinsley created this Life Tributes page to make it easy to share your memories.

Send flowers to the Tinsley family.