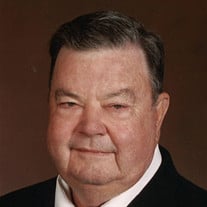 Gerald was born in Calumet, Oklahoma on November 15, 1933 and passed away Thursday, September 22, 2016. He was the son of Hazel and Ralph Crowly. Gerald was raised in Calumet, Oklahoma where he graduated from high school. He spent two years at Oklahoma State University where he studied Animal Husbandry. Gerald married Betty Ann Jensen on February 11, 1956. Together they moved to Alaska, where Gerald served his country in the US Army Reserve. After his service Gerald and Betty moved back to El Reno, Oklahoma, where Gerald worked on the family farm. Gerald was a lifelong farmer who enjoyed raising cattle, planting his crops and following the commodity market. Gerald was preceded in death by his parents. He is survived by his wife, Betty. Children: Son, Michael R. Crowly and wife Penny, Daughter, Susan A. Schwarz and her husband Larry. Grandchildren include: Jacob Schwarz, Abby Schwarz, Stormy and Casey Chapman, April Ellison. Great-grandchildren: Roy, Gwen, Tia and Rian. Funeral services will be held Monday, Sept. 26, 2016 at 2:00 PM at Wesley United Methodist Church with burial to follow in the El Reno Cemetery. Visitation will be held Sunday, Sept. 25, 2016 from 1-6pm at the funeral home. Services are under the direction of Wilson Funeral Home.

The family of Gerald Ray Crowly created this Life Tributes page to make it easy to share your memories.

Send flowers to the Crowly family.