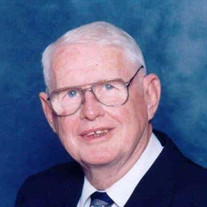 George E. Sykes, 86, of El Reno Oklahoma, went to his heavenly home, Saturday, December 2, 2017. George graduated from Watonga High School and joined the Army in 1948. George served as an enlisted soldier with the 45th Infantry Division during the Korean War and an active duty Infantry Officer during 2 tours in Vietnam. He retired in 1991 as a Lieutenant Colonel with over 42 years of total service to the country. George owned the local Western Auto in El Reno and was a manager of several Finance Offices. In his retirement he advocated and supported many causes with the 45th Infantry Division Association, VFW, American Legion, Military Officers’ Association, E.A.G.L.E.S., and was an Honorary Chief of the Cheyenne Arapaho Tribes. He was a member of Trinity Lutheran Church for nearly 45 years, where he claimed his greatest achievement as a follower of Jesus Christ. George was preceded in death by his parents, George W. Sykes and Viola M. Sykes. He is survived by his loving wife of nearly 65 years, Ermaleen Sykes; four children, George B. (Vicki Yoder) Sykes, John H. (Carol) Sykes, Kimberly S. Platt, and Terry L. (Sandra) Sykes; 13 grandchildren (George M., Scott, Timmy, Kristan, Nicole, Eric, Tommy, Lauren, Melinda, Ariel, Lindsay, Elisha, and Alan); and many great-grandchildren that adored their Grandpa; Sisters, Bonnie (Buck) Hood, and Mary (Merle) Wanzer; and brother, Robert Sykes. Visitation will be Thursday, Dec. 7, 4:00 PM until 8:00 PM; and Friday Dec. 8, from, 1:00 PM to 8:00 PM, at the Wilson Funeral Home Chapel. Funeral services will be held Saturday, Dec. 9, 2017 at 10:00 AM at Trinity Lutheran Church, El Reno, with burial to follow at the El Reno Cemetery. Services are under the direction of Wilson Funeral Home.

The family of Lt. Col. George Everett Sykes created this Life Tributes page to make it easy to share your memories.

Send flowers to the Sykes family.