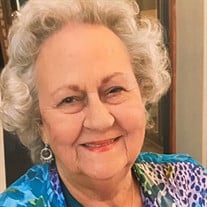 Evelyn Watson Parker Elliott, loving mother, wife, Bami, and aunt, passed away on May 2, 2022. She was born in El Dorado, Arkansas on December 5, 1934, to parents John A Watson and Frances Armintha Fletcher. In 1952, she graduated from Norphlet High School. After graduating high school, Evelyn married Sherald Parker and moved to Oklahoma City. Together they had two children: Tajuana in 1953 and Marc in 1956. In 1969, Evelyn married Bill Elliott and became stepmother to his four children; Danny, Joyce, Charles, and Pat. Together they had another son, Joshua in 1995. Evelyn held several different positions during her working career. She worked as a bank teller at OKC Federal, a beautician, and then Rockwell International in sales. Later, she opened Yukon Flowers and Gifts and Heritage Flowers and Gifts and worked there for many years until she re-tired. Outside work, Evelyn enjoyed many activities. Together with her daughter Tajuana, she was involved with many plays. With a love of water, she had many fun trips to Lake Murray and Ft. Cobb where she taught both kids to ski (with life jackets) before they could even swim. Evelyn could do trick waterskiing and ski barefoot, showing off her skills even into her 70’s. She also took the kids skating and entered them into competitions. When she wasn’t busy on the water or with her children, she enjoyed going to garage and estate sales where she collected antiques. Evelyn was a wonderful cook and was known as the worlds best biscuit maker. Together with her husband, Bill, they bought their big house on Williams. They remodeled every-thing to accommodate their 6 children. It was a festive place, especially at Christmas time where it was always decked out and they loved to have all the family there for delicious food. They also had property at Lake Eufaula, where there were lots of fish fries and homemade ice cream to be had with friends and family. Evelyn was proceeded in death by her parents John A and Frances Watson, husband Bill Elliott, in-law’s Chester Elliott and wife Margaret, sister Mildred Appleton, son Danny Elliott and wife Bren-da, son-in-law Richard Thornton, granddaughter Bethany, and grandson Matthew. She is survived by her children Tajuana Wisner and husband George, Marc Parker and wife Joanna, Joyce Thornton, Charles Elliott and wife Sherri, John Patrick Elliott, and Joshua Elliott and wife Shirley; and her grandchildren Erick Elliott, Chris Elliott and wife Jennifer, Steven Cox, David Cox and wife Aimee, Erin Tinsley and husband Cory, Andrea Littlecreek, Matt Wisner and wife Tracey, Michael Duff and wife Chelsie, Jason Elliott, Christina Blackburn and husband Randall, Dalton Wisner, Jeanette Elliott, Justin Elliott and wife Justine, Billy Joe Parker, and her partner of 10 years, Herb Nail. She is also survived by her 41 great grandchildren and 3 great-great grandchildren. Evelyn, who loved Jesus with all her heart, was greatly loved and will be greatly missed.

Evelyn Watson Parker Elliott, loving mother, wife, Bami, and aunt, passed away on May 2, 2022. She was born in El Dorado, Arkansas on December 5, 1934, to parents John A Watson and Frances Armintha Fletcher. In 1952, she graduated from Norphlet... View Obituary & Service Information

The family of Evelyn Elliott created this Life Tributes page to make it easy to share your memories.

Send flowers to the Elliott family.