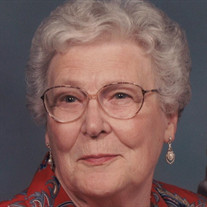 Louise Jerman passed away June 6, 2018 in Chickasha. She was born Aug. 11, 1926 in El Dorado, AR to Pete and Jewel (Southall) Johnson. Louise was raised in El Reno and graduated from El Reno High School in 1944. She moved to Chickasha six years ago to be closer to her son. She worked as a clerk for Bournes Jewelry in El Reno for about 25 years. Louise was a member of the First Christian Church and active in the Federal Bureau of Prisons Retirees. She and her husband, Phillip were inseparable. They enjoyed family vacations at the Patswald’s Cabin in Westcliff, CO. After retirement, they enjoyed travelling with her brother and sister-in-law, Rayford and Ruth Johnson. The family appreciates the staff at Denny’s and their parent’s neighbors, Thurman and Kathy Jones, for looking after them while they lived in El Reno. The family would also like to thank the staff at Brookdale in Chickasha for their loving care. Louise was preceded in death by her parents; husband, Phillip Jerman; and brothers, Daniel and Rayford Johnson. Survivors include her son, Jack Jerman and wife Karen of Chickasha; daughter, Betty Shepard and husband Larry of Kent, WA; grandchildren, Jeff Shepard and wife Ali, Jason Shepard, Holly Miller and husband Justin, Chad Jerman and wife Tara, and Brian Jerman and wife Kinzie; great grandchildren, Tyler Miller, Tanner Wallace, Ryan Miller, Blair Wallace, Brock Jerman, Russell Jerman, Burke Shepard, Easton Jerman, Hannah Miller, and Reese Jerman; brother-in-law and sister-in-law, Bill and Carlene Jerman of Bella Vista, AR; and other relatives and friends. Viewing will be held Thurs. 6/7/18 from and 3-5pm and Friday, 6/8/18 from 8am-5pm at the funeral home. Graveside services will be held Monday, June 11, 2018 at 11:00 A.M. at El Reno Cemetery. Services are under the direction of Wilson Funeral Home.

Louise Jerman passed away June 6, 2018 in Chickasha. She was born Aug. 11, 1926 in El Dorado, AR to Pete and Jewel (Southall) Johnson. Louise was raised in El Reno and graduated from El Reno High School in 1944. She moved to Chickasha six... View Obituary & Service Information

The family of Evalyn Louise Jerman created this Life Tributes page to make it easy to share your memories.

Send flowers to the Jerman family.