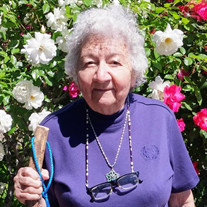 Emelia Madeliene (Tesnareski) Risenhoover passed away peacefully surrounded by family on Tuesday February 15th, 2022. Madeliene was born on May 25, 1926 in San Antonio Texas, where she met her husband, James A. Risenhoover, on a blind date. They were married 67 years before James' death in 2015. Madeliene was preceded in death by her parents, Celeste and Rudolph Tesnareski. Madeliene was blessed with two younger sisters, Esther Day of Washington D.C. and Katherine Simmons and her husband Don of Richardson Texas. Madeliene was a loving mother to her daughter Yvette and husband Stanley Turk of Bowie Maryland and to her son Michael Risenhoover and wife Julie of Woodridge Illinois. Madeliene is survived by her grandchildren, Daniel and Robert Turk of Bowie Maryland, Dylan Risenhoover and his wife Ciara of Walsenberg Colorado and Justin Risenhoover and his wife Becca of the home who lovingly cared for Madeliene until her passing. Madeliene also had two great grandchildren who were her pride and joy, Ethan Risenhoover of the home and Toby Risenhoover of Walsenberg Colorado. Madeliene lived a wonderful 95 years and touched the hearts of many people. A simple ceremony will be held with close family and friends on Friday February 18th and she will be laid to rest at the El Reno Cemetery. In lieu of flowers Madeliene would suggest donations to Russell-Murray Hospice in El Reno. A come and go viewing and visitation will be on Thursday, February 17, 2022 from 1:00 PM to 6:00 PM. A funeral service will be at Wilson Funeral Home in the chapel on Friday, February 18, 2022 at 10:00 AM with burial to follow at the El Reno Cemetery.

Emelia Madeliene (Tesnareski) Risenhoover passed away peacefully surrounded by family on Tuesday February 15th, 2022. Madeliene was born on May 25, 1926 in San Antonio Texas, where she met her husband, James A. Risenhoover, on a blind date.... View Obituary & Service Information

The family of Emelia Madeliene Risenhoover created this Life Tributes page to make it easy to share your memories.

Send flowers to the Risenhoover family.