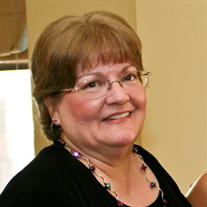 Donna Sue Jones, 70, longtime resident of Minco, OK, passed away on October 10, 2021. Donna was born May 17, 1951, to Ernest Chester Fitch, Jr. and Janette Dyche Fitch in Tulsa, OK. The family moved to Stillwater in 1953. After graduating from Stillwater's C.E. Donart High School in 1969, Donna attended Oklahoma State University. She transferred to Southwestern State University at Weather-ford, OK her sophomore year and graduated with a B.S. degree in 1974. On March 27, 1982, Donna married Robert "Bob" Franklin Jones, Jr. in Stillwater, OK. They lived in Minco and were active members of the First Baptist Church. Donna and Bob had one child together, Robert "Bobby" Franklin Jones, III, born August 15th, 1984. Bob also had a daughter, Kiera Luan Jones, born October 7, 1975. Donna enjoyed music and sang in the church choir. As a child she was an accomplished accordionist, playing in numerous contests and recitals. She also played the flute in the high school band. Later, Donna learned to play guitar and piano. At holiday gatherings she would join other family members playing and singing church and popular tunes. Donna treasured time with her immediate family, Bob, Bobby and later grandson, Mikel. She loved watching and following her son and grandson in various sports including football, baseball, and wrestling. They also enjoyed camping and fishing and traveled to such places as Galveston, Colorado and Memphis. Donna’s skills at business and accounting landed her several good jobs during her career as a professional office worker. These included positions at companies such as Purina, Perfection Equipment Co. and Mercy Hospital. She retired in 2016. Donna is preceded in death by her parents, her husband Bob, and her daughter-in-law Amanda. She is survived by her son Bobby, daughter-in-law Sonya, grandson Mikel Jones, step-granddaughter Morgan and step-grand-son Connar of Tuttle, OK. Donna is also survived by her stepdaughter Kiera and step-grandson Tommy. Further, Donna is survived by her sister, Paula Joan Fitch, of Stillwater, OK, and her brother, James Chester Fitch, of Tulsa, OK. Funeral services will be held at the Wilson Funeral Home in El Reno, OK at 11:00 am on Saturday, October 16, 2021. Internment at Hazel Dell Cemetery near Cogar, OK.

Donna Sue Jones, 70, longtime resident of Minco, OK, passed away on October 10, 2021. Donna was born May 17, 1951, to Ernest Chester Fitch, Jr. and Janette Dyche Fitch in Tulsa, OK. The family moved to Stillwater in 1953. After graduating from... View Obituary & Service Information

The family of Donna Sue Jones created this Life Tributes page to make it easy to share your memories.

Send flowers to the Jones family.