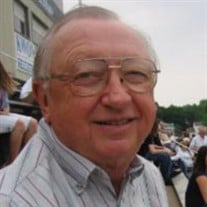 Don L. Deatherage: 1937-2021 Public visitation for Donald L. Deatherage will be held Tuesday, March 30, from noon until 8:00 PM at Wilson Funeral Home in El Reno. Don passed away at home on Friday, March 26, 2021. Private interment will follow at El Reno Cemetery. He was born December 12, 1937, in Shawnee, Oklahoma. After graduating from El Reno High School in 1956 and Oklahoma State University four years later, he married the love of his life, Marie, on September 1, 1960. He was a co-owner of Dee’s Tire Store in El Reno for many years, later working with car dealerships and at Sears Tire Center at Quail Springs. He served as a Deacon and Elder at First Presbyterian Church in El Reno, and was a former chairman of the Board of Trustees of Park View Hospital. He enjoyed collecting O-scale model trains, watching anything John Wayne ever did, and eating chicken fried steak; he raised cattle, wheat, two cats, two children, and two grandchildren, although none of these necessarily in that order. He was preceded in death by his parents, C.S. “Dee” Deatherage and Leola Deatherage, his younger brother Larry Deatherage, and his firstborn daughter, Donna Marie Deatherage. He is survived by his wife of 60 years, Marie Deatherage; two children, Delia Lamb of Bartlesville and husband John, and Matt Deatherage of El Reno; and two grandchildren, Christopher Lamb of Bradenton, FL and wife Merissa, and Debby Marshall of Norman, OK and husband Andrew.

The family of Don Deatherage created this Life Tributes page to make it easy to share your memories.

Send flowers to the Deatherage family.