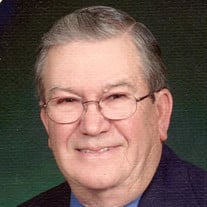 Davie Clarence Abner, 89, of El Reno left this world to be with his Heavenly Father on January 2, 2022. Davie was born in Hartshorne, Oklahoma on November 6, 1932 to Virgil Lee and Johnnie Ruby (Manning) Abner. Davie moved to El Reno in 1942, attended El Reno schools and graduated from El Reno High School in 1952. He worked in grocery stores from the age of 13, working in Hurst Grocery from 1951 to 1981. Davie then went to work at Abstract Title Company until his retirement in 1995. Davie married Peggy Louise Tate in 1954. They were married 40 years until her passing in 1994. He married Melba Jean Brower in 1995. Davie and Jean were just short of their 27 year anniversary. Davie loved to restore old cars, travelling, fishing, hunting, camping and working in yard and garden. He loved music and played the guitar, harmonica and dulcimer. He was also an avid fan of OU football and basketball and loved to watch the OKC Thunder play. Davie was a dedicated husband, father, grandfather and friend. All who will miss him immensely. He attended Trinity Baptist Church since he was in the 6 th grade. He had a very close relationship with God. He served in many areas of the church over the years and became a Deacon in 1968. Davie was preceded in death by his parents, wife Peggy, son Mitchell, and brothers Printer and Oakley. He is survived by his wife Melba Jean, Son Brent and wife Connie of El Reno, O. Dee Brower and wife, Shari of El Reno, daughter Sherry and husband, Lynn Compton of Platte City, MO, daughter-in-law Cheryl Abner of Roanoke, VA; 10 grandchildren, 15 great-grandchildren, and numerous nephews and nieces. Services will be at 2:00pm Friday, January 7, 2022 at Trinity Baptist Church of El Reno followed by burial in El Reno cemetery. Viewing will be held on Thursday, January 6, 2022 from 8:00am to 8:00pm with family present from 5:00pm to 7:00pm at Wilson Funeral Home.

Davie Clarence Abner, 89, of El Reno left this world to be with his Heavenly Father on January 2, 2022. Davie was born in Hartshorne, Oklahoma on November 6, 1932 to Virgil Lee and Johnnie Ruby (Manning) Abner. Davie moved to El Reno in 1942,... View Obituary & Service Information

The family of Davie Clarence Abner created this Life Tributes page to make it easy to share your memories.

Davie Clarence Abner, 89, of El Reno left this world to be with...

Send flowers to the Abner family.