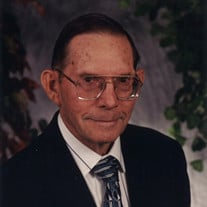 David Donald Reimers passed away on September 8, 2017 in El Reno, Oklahoma. He was born September 1, 1926 in Calumet, Oklahoma, to Fred C. and Emma (Dingle) Reimers. David served his country in the U.S. Army Air Corps during WWII. He was a crew chief of an A-26, gladly serving in the military alongside his twin brother, Dan. After his service, he began working at Tinker Air Force Base. He married Betty Jane Lowder on January 28, 1951. In a short while Betty and David moved to Calumet, Oklahoma, to begin dairying and farming. Dave farmed wheat, cotton, and hay crops for his Holstein dairy cows and Angus beef cattle. David was a member of the United Methodist Church in Calumet where he served as chairman of the board and as a Sunday school teacher. Community service was important to him, as evidenced by his work on the Calumet School Board and the Canadian County Farm Bureau Board. In 1955, the Central North Canadian Soil Conservation District and the Oklahoma Bankers Association acknowledged him with a certificate naming him “A Friend of the Land” in recognition of his having completed a conservation course. Though farming left him little leisure time, fishing was a favorite hobby. He was preceded in death by his parents; brothers Ernest, Daniel, and Keith Reimers; sisters, Alice Zweiacher, Lucille Wright, and Dorothy Mills. Survivors include his wife, Betty Jane (Lowder) Reimers of El Reno; daughters Valerie Ann Reimers of El Reno, Marsha Hope (Reimers) Leck and husband Danny of Calumet; sister, Betty Jo Urban and husband Vernon of Oklahoma City; grandchildren, Nantaara Jafri Williams and husband Sean of Berlin, Germany, and Dustin Vincent Leck and wife Sonya of El Reno; great-grandchildren Dietrich Karson Leck and another great-grandson who is on the way. Numerous nieces, nephews, cousins and friends will also remember him. Services, under the direction of Wilson Funeral Home, El Reno, Oklahoma, will be held Thursday at 10:00 a.m, Sept. 14 at the Calumet United Methodist Church, followed by a graveside service at Canadian Valley Cemetery, Calumet. Viewing will be Tuesday, Sept. 12, and Wednesday, Sept. 13, 8:00 a.m. to 8:00 p.m. Family will be present Wednesday, Sept. 13, from 6:00 to 8:00 p.m. Donations may be made to the charity of your choice in David’s memory.

David Donald Reimers passed away on September 8, 2017 in El Reno, Oklahoma. He was born September 1, 1926 in Calumet, Oklahoma, to Fred C. and Emma (Dingle) Reimers. David served his country in the U.S. Army Air Corps during WWII. He was... View Obituary & Service Information

The family of David Donald Reimers created this Life Tributes page to make it easy to share your memories.

Send flowers to the Reimers family.