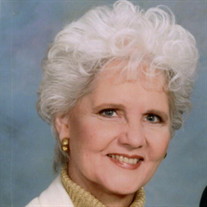 Corliss Jean (Allen) Collins , age 83, passed away on October 12, 2021 in Oklahoma City. She was born on April 7, 1938, in El Reno, OK, to Corliss Binning Allen and Katherine Grace (Evans) Allen. She graduated from El Reno High School in 1956, attended Oklahoma Baptist University in Shawnee from 1956-1958, earning a Secretarial Science Certificate; worked at Concho Indian Agency, Concho, first as a secretary and later as a Welfare Aide from 1958-1964. She furthered her education and graduated from Southwestern State College, Weatherford, summa cum laude in 1966; earned a Master of Social Work from the University of Oklahoma in 1968. She worked for the Sunbeam Family Services from 1968-1972 as a Family Counselor; became an entertainment and theatrical manager/agent of young talent in the 1980’s throughout 4 states; and in the 1990’s served as a substitute teacher in the Putnam City School District in OKC. Corliss married Wesley Mac Barnes, her teenage sweetheart, on February 14, 1958, in El Reno. To this marriage were born two sons, Bryan Dwayne Barnes and Bryson Allen Barnes. Corliss and Wesley were divorced on February 13, 1969, in El Reno. Corliss married the love of her life, William Edward Collins, Jr., on June 20, 1970, in OKC and to this marriage was born a daughter, Corliss Adora Collins. Corliss’ hobbies included genealogy for which she was awarded a blue ribbon at the 1973 State Fair of Oklahoma. She also enjoyed planning and organizing family reunions as well as high school reunions. Corliss dearly loved founding the Show Biz Kids’ and God’s Kids’ groups – professional groups of young people, ages 5-16, who performed throughout Oklahoma. She took some of these young people to Los Angeles, CA as their theatrical manager so they could pursue their dreams of acting. The movie and television credentials of her “kids” made it possible for her to judge many talent and scholarship competition, such as preliminaries to the “Miss Oklahoma Pageant”, “Miss Oklahoma National Teenager”, ”Oklahoma’s Junior Miss”, ”Oklahoma Kids”, ”Reach for the Stars”, and many others. She was a Registered Social Worker certified by the Oklahoma State Board of Registered Social Workers. and a Licensed Social Worker by the State of Oklahoma. She held memberships in the National Association of Social Workers; Oklahoma Health and Welfare Association; Academy of Certified Social Workers; Oklahoma Association for Children with Learning Disabilities; and Oklahomans for Gifted and Talented. She held previous memberships in the Oklahoma Genealogical Society; the Oklahoma Historical Society; the Canadian County Genealogical Society; and the OKC Chapter, Daughters of the American Revolution. Corliss was a born leader. In El Reno High School, Corliss was elected as Vice-President of the Senior Class, President of the BMC Literary Society, Vice-President of the T&I Club and was President of the Homeroom classes each year. Corliss was President of the Lincoln School PTA, President of Beta Sigma Phi and Member of Modern Mothers Club in El Reno. At OBU, she was Social Chairman of Beta Beta Epsilon Business Society and member of the YE Social Club. While growing up in El Reno and attending the First Baptist Church, she sang on a regular basis in choir from childhood until 30 years of age. After moving to Oklahoma City from El Reno, she joined the Putnam City Baptist Church, where she was Assistant Teacher to her Sunday School class and worked in Vacation Bible School. Later, she joined the Nichols Hills Baptist Church (later Quail Springs Baptist Church), where she taught a Sunday School class of 5th and 6th grade girls and helped the girls make a video of Ruth from the Bible. She worked in the Homebound Department, ministering to the elderly who couldn’t attend church; was a member of the Prayer Ministry; and volunteered for calling committees. She loved the Lord deeply, and her favorite Bible verse was Philippians 1:21, “For me to live is Christ and to die is gain”. Survivors include her husband of 51 years, Dr. William E. Collins of the home in OKC; her daughter, Corliss Adora Collins, of Oklahoma City; her sons, Bryan Dwayne Barnes and Bryson Allen Barnes of Oklahoma City; a brother and sister in law, Bob and Mary Lee Allen of Oklahoma City; five grandchildren; four great grandchildren and many nieces and nephews. Corliss Jean was loved and admired by all those who knew her. She will be deeply missed. After having served so many others on earth throughout her life, she now walks pain free in Heaven with our Lord and Savior. Funeral Services will be held at 1:30 P.M., Friday, October 22, 2021 at Quail Springs Baptist Church 14613 N May Ave, Oklahoma City, OK 73134 with Rev Ray Griffin officiating. Come and go viewing will be held at the funeral home from 8:00 a.m. – 8:00 p.m., Thursday, October 21 at Wilson Funeral Home. Graveside Services will be held at the El Reno Cemetery. Services are under the direction of Wilson Funeral Home, 100 N. Barker, El Reno, Oklahoma.

The family of Corliss Jean Collins created this Life Tributes page to make it easy to share your memories.

Send flowers to the Collins family.