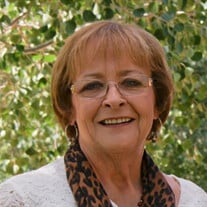 Connie J. Shrum went to be with the Lord on December 23, 2019, at the age of 74. Her final days were at Integris hospital in Yukon, Oklahoma, after a year-long, courageous battle with cancer. Funeral services will be held at 10:00 a.m.; Saturday, December 28, 2019, at Calumet Public Schools with Dr. Keith Weldon officiating under. Burial will follow in Mount Pleasant Cemetery, West of Watonga. Visitation will be held from 9:00 a.m. to 8:00 p.m., Friday, December 27. Services are under the direction of Wilson Funeral Home. She was born Connie J. Grote in Kingsville, Texas, on June 21, 1945. She lived in Watonga with her parents until she married Malvin Shrum, on February 4, 1961. Those early years they moved quite often before settling in Watonga in 1969. Malvin went to work at the federal prison in El Reno in 1975. They moved to Calumet in 1977, where they lived for 40 years before they recently moved to Oklahoma City. When Connie was younger, she worked in her parent’s meat locker plant. Then she became a beautician, real estate agent and homemaker for the majority of her adult life. She also worked in the office for the town of Calumet and the election board. Most recently she was the head cook at Fun Valley Resort in Colorado. Connie is survived by her husband Malvin; Son, Daniel Shrum and wife Tamala of El Reno; Son, Kenneth Shrum and wife Kim of Yukon; Daughter, Rhonda Ballard and husband Mark of Troy, TX; Sister, Beverly Pointer of Kingfisher; Brother, Mark Grote and wife Karen of Watonga; Grandchildren: Lyndsie Elliott and husband Brian of El Reno, Justin Shrum and girlfriend Jamie Wright of Bethany, Sierra Adams and husband Billy of Tulsa, Corey Branch of Cheng du, China, Scarlett Shrum and fiancé Jake Dye of El Reno, Whitlee Estavillo and husband Darius of Cambridge, England, Kelsey Rumenapp and husband Brad of Piedmont, Twister Ballard of Troy, TX; and Great Grandchildren, Lilly, Brayden, Lela, Zoe, Abbie-Jo, Jordan, Dean and Millie. She was preceded in death by her parents Warren Grote and Bonnie Woldridge Grote of Watonga and mother-in-law, Clara Blackwolf Oldcrow of Hammon.

Connie J. Shrum went to be with the Lord on December 23, 2019, at the age of 74. Her final days were at Integris hospital in Yukon, Oklahoma, after a year-long, courageous battle with cancer. Funeral services will be held at 10:00 a.m.; Saturday,... View Obituary & Service Information

The family of Connie J Shrum created this Life Tributes page to make it easy to share your memories.

Send flowers to the Shrum family.