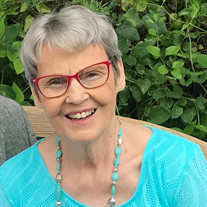 On Thursday, December 2, 2021, Cleo Ferne Kopp — loving wife, mother and Mema — passed away at age 81. Cleo was born on January 19, 1940 in Enid, OK to Emanuel and Viva (Pfhrem) Leseberg (later Reimer). After marrying her husband Judd Kopp in 1958, they lived in Billings and Pawnee before starting their family in Sperry. The family moved to Kingfisher in 1975, where Cleo worked for more than 20 years as the middle school secretary in the Kingfisher Public School system. She maintained a deep and long-lasting relationship with the First Baptist Church of Kingfisher, where she served not only as a faithful member, but also a preschool Sunday School teacher for 25 years, a proud member of the church choir and a volunteer on several ministry committees. Cleo spent her time on earth dedicated to serving others in her family and community. Her unwavering faith led her to freely give her time, talents and energy to anyone in need. Her sweet smile and spirit shone through in her role as Kingfisher’s “Mrs. Claus,” which she performed each year in the city’s Christmas parade, as well as throughout the local schools. Cleo was especially known for her many meals prepared and served with love, not only to her large family, but also to friends and acquaintances dealing with illness and death in their own families. Her true calling card was her signature homemade cookies that she would bake and personally deliver to anyone needing a blessing, a thank you, or just a “snicky-snack.” Cleo was preceded in death by her mother, Viva, and three sisters, Lois Miller, Billie Sweet and Patricia Serviss. She is survived by her husband of 63 years, Judd, her three children — sons Willi and Jarrod Kopp of Tulsa, and daughter Andi Boutwell of Piedmont — and nine grandchildren, plus six great-grandchildren. A funeral service will be held on Wednesday, December 8, at 10am at the First Baptist Church of Kingfisher (1340 S 13th St.). There will be a special time for viewing and visitation at Wilson Funeral Home (1612 S. Main St.) on Tuesday, December 7, from 9:00 a.m. – 8:00 p.m., with family present from 5-7 p.m. Donations in Cleo’s memory may be made to the First Baptist Church of Kingfisher. Services will be live streamed at https://www.facebook.com/fbckingfisher

The family of Cleo Kopp created this Life Tributes page to make it easy to share your memories.

Send flowers to the Kopp family.