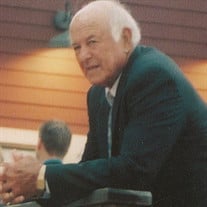 Funeral services for Charles Lloyd Holbrook Sr. of El Reno will be held at 2:00 p.m. Friday, September 27, 2019 in the Church of Christ at London & Macomb. Mr. Gary Henson will officiate. Interment will be in the El Reno Cemetery. Services are under the direction of Wilson Funeral Home. Mr. Holbrook passed away on Monday, September 23, 2019 at his home surrounded by family members. He was born on January 11, 1928 at Lebanon, Oklahoma. He was the youngest of a family of eleven children. He grew up and attended school in the Ardmore, Oklahoma area, and spent his youngest years farming with his parents and brothers and sisters. In 1948, Charles moved to Norman, Oklahoma and took a job at Davidson Case Lumber Yard. He learned every aspect of the lumber business. In 1955, he was offered and accepted the manager position at Allied Lumber Yard in El Reno. He moved his family to El Reno where he became a permanent resident. As manager of Allied Lumber Yard, part of his duties was to be the project manager for the new homes being built in the subdivision on Underwood Street. In 1959, he went into private business as a home builder and developer. Before retiring, Charles developed several subdivisions and built over 500 homes in El Reno. Charles also served for many years as an El Reno City Councilman. Mr. Holbrook was a member of the Church of Christ. He was a competitive member of the El Reno Sportsman Club and enjoyed fishing and hunting, winning numerous awards. He also loved playing the guitar and singing songs to his many grandchildren, great grandchildren and great-great-grandchildren. Mr. Holbrook was preceded in death by his wife, Ruby Jo Holbrook; parents, John Walker and Sarah Holbrook; son, David Holbrook; grandson, Alan Morgan; granddaughter, Rebecca Babb; granddaughter, Chelsea Pesek; sisters, Jewel, Edna, Gladys, Mabel and brothers, James, Cecil, Elmer, John, Leige, and Lonnie. Survivors include his daughter, Sandra Holbrook Cox and her husband, Dale Cox of El Reno; daughter, Donna Pesek of Friendswood, Texas; daughter, Doyleta Horton and husband Larry of Midlothian, TX; daughter, Jolene Taylor and husband Marland of Oklahoma City; daughter, Cecilia Holbrook Hobson and her husband Tim of El Reno; son, Charles Lloyd Holbrook Jr. & wife, Kay of Yukon; daughter, Cheryl Holbrook Jones and her husband, Steve of Twin Bridges, Montana, and daughter in law, Tami Holbrook of El Reno, 19 grandchildren, 24 great grandchildren, five great-great grandchildren, and a host of loving nieces, nephews and dear friends.

Funeral services for Charles Lloyd Holbrook Sr. of El Reno will be held at 2:00 p.m. Friday, September 27, 2019 in the Church of Christ at London & Macomb. Mr. Gary Henson will officiate. Interment will be in the El Reno Cemetery. Services... View Obituary & Service Information

The family of Charles Holbrook Sr. created this Life Tributes page to make it easy to share your memories.

Send flowers to the Holbrook family.